Harrison tries to get back on his feet again

please use photo as single column 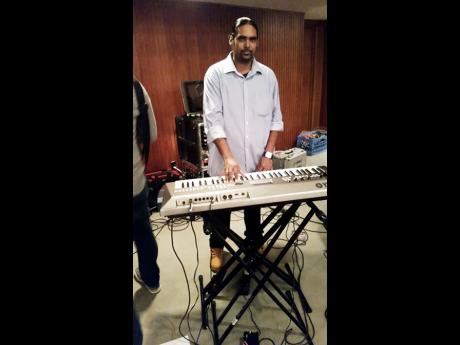 Contribted
Jerome Harrison playing at an event before the amputation.

Having been diagnosed with chronic illnesses, one of which later resulted in the amputation of his leg, 32-year old Jerome Harrison could have given up on life, but now, he is a living testimony that God's grace is unending.

"In 2008, I visited a health fair at the Royal Flat SDA (Seventh-Day Adventist) Church and discovered I had diabetes and hypertension. I started doctor's visits and treatment until I started to slack off on taking my medication and the doctor's visits became less."

Although he was aware of the illnesses, Harrison was still eating and drinking the same things and, naturally, his health deteriorated.

"In February, 2017, I got a cut on the bottom of my foot and I tried to look after it by myself. It worsened and I had to be admitted to hospital."

Because of the extent of the infection, Harrison had to choose between death and having his leg cut off.

"At that point, I just wanted to be alive, so I agreed with the doctors to take the leg off below the knee. During that time, I reflected on my life the good and the bad decisions I had made. I prayed and asked God for His will to be done.

"I was in the hospital for three weeks during which I had time to think about my situation - what it meant and how I was going to deal with it. But I am blessed to have a very loving, caring, wonderful family - Michael (Dad), Jackie (Mom), Marion (Aunt), and a host of other family and friends - who were a tower of strength," Harrison added.

Harrison, who works as a graphic designer in the Corporate Communication, Marketing & Public Relations Department at Northern Caribbean University (NCU), is also a noted musician who plays the keyboard for several bands and groups, namely the Knockpatrick Youth Choir (KYC), Anointed Musicanz & Singers, the Total Praise Band, the Supreme Gospel Band, and Praise Ministries, locally and internationally. He said although he is now limited in terms of mobility, he will never stop doing what he loves.

"This is the start of a new chapter in my life, and I have decided to make the best of my situation even though I am limited, for now, in going places and doing some things. I am learning to work around this and find different ways of continuing my life. The key to this is willpower, telling myself this will not get the better of me, life goes on."

INSPIRATION TO CARRY ON

Harrison added that he uses a few songs he plays as inspiration to carry on.

"There are two songs that I play for two groups that keep resounding in my head: God Restores (Praise Ministries) and More Than I Can Bear (KYC). I believe God has a purpose for me, and this setback is for a better comeback. We are faced with trials, but if you just keep faith in God, that's all you'll need. Whatever He does, is well done.

Harrison will soon need a prosthesis and welcomes any assistance he can get.

"Some friends of mine decided to put on a benefit concert to be held on Saturday May 27 (today) at the Northern Caribbean University's gymnatorium to help raise funds to acquire the prosthetic leg. This may cost approximately US$20,000."

Harrison says that more than ever he is looking forward to being able to get back on his feet again, continuing his music ministry, and spreading the good news of salvation to the world.