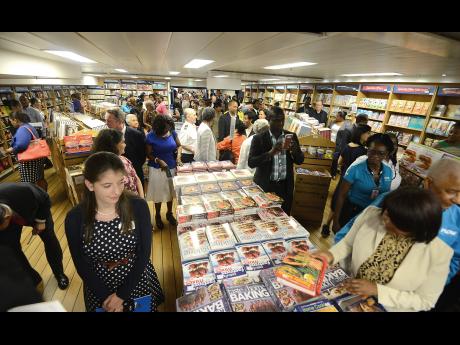 The book ship, which is docked at the Caribbean Cement Company pier in Rockfort, east Kingston, suspended operations last Friday after workers attached to the company walked off the job.

The workers returned to the job late Friday night following a meeting at the Ministry of Labour, paving the way for visitors to access the ship.

According to corporate communication manager at the cement company, Sophia Lowe Pinnock, patrons were able to access the ship at the regular opening hour of 10 a.m. yesterday.

"Everything is back to normal this morning (Saturday). It actually returned to normal from yesterday (Friday). The book ship has been open on schedule from this morning; all our operations are back up and running and we are dispatching to customers from early this morning," Lowe told The Sunday Gleaner.

She said employees blocked access to all the gates of the company last Friday and the ship is docked on the company's property.

"There was no quarrel with the book ship. It was just affected by the industrial action of the employees. It was not a matter of anyone being threatened or any argument or anything like that. It was simply that the employees, in a way to make their point, blocked access to all the gates, and that included access to the book ship," added Lowe Pinnock.

She noted that the cement company plant was also back in full operation, with supplies being dispatched as scheduled.

The Logos Hope is the world's largest floating book fair and has been in Kingston since May 12. It is scheduled to remain at the Caribbean Cement Company's pier until June 11.

'Logos Hope' to welcome Jamaicans on board