JISCO fine-tunes operations for next month's reopening of Alpart 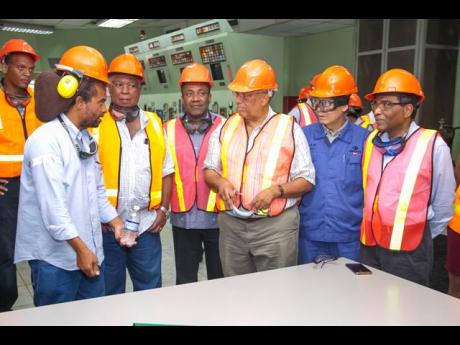 Contributed
Opposition leader Dr Peter Phillips (centre front) listens as an employee of the JISCO-owned ALPART bauxite plant explain the preparations taking place ahead of next month's reopening. Also present is Opposition spokesman on mining, Phillip Paulwell (centre back). Both were members of a touring party of the bauxite plant last week.

The Chinese-owned Jiuquan Iron and Steel Company (JISCO), is set to reopen the ALPART alumina plant in St Elizabeth by the end of next month.

Managing director of the company, Liu Wanxiang, says the plant's operating capacity is to be doubled through an investment of about $2 billion, which will result in about 1,000 people being employed, 700 of them Jamaicans.

The development, which reports have indicated include a 500,000 tonne per year smelter, is to take place over the course of the next three to five years.

The contract with the Chinese firm was brokered by the Portia Simpson Miller administration and the Alpart operations sold by Russian firm, UC Russal to JISCO in July last year for US$300 million.

Opposition Leader Dr Peter Phillips, who recently toured the facilities along with Opposition spokesman on mining and energy, Phillip Paulwell, and other members of the People's National Party, endorsed the return of operations to the plant.