Growth & Jobs | Women CEOs earn big pay, but few of them have the top job 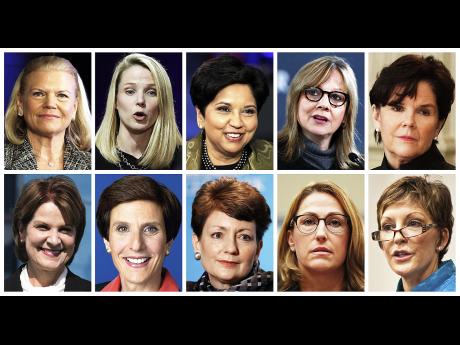 Women CEOs earned big bucks last year, but there are still very few of them running the world's largest companies.

The median pay for a female CEO was US$13.1 million last year, up nine per cent from 2015, according to an analysis by executive data firm Equilar and The Associated Press. By comparison, male CEOs earned $11.4 million, also up nine per cent.

But the number of women in CEO roles has barely budged. Just six per cent of the top-paid CEOs in the US last year were women, according to the Equilar and AP analysis, a slight increase from about five per cent in 2015 and 2014.

The highest-paid woman was Virginia Rometty of International Business Machines Corp, bumping out Yahoo's Marissa Mayer from the top spot.

Rometty earned $32.3 million last year from the technology company, a 63 per cent jump from the year before, mainly due to $12.1 million in stock option awards she didn't receive in 2015.

Mayer earned $27.4 million last year, making her the second-highest-paid woman. But she may be out of a job after Yahoo Inc completes the sale of its websites and email services to Verizon Communications Inc in June. She's not expected to join Verizon, and Yahoo has said that Mayer will receive a $23 million severance package if she departs.

Third on the list was Indra Nooyi of PepsiCo Inc, the maker of Mountain Dew soda and Lay's potato chips. She earned $25.2 million, up 13 per cent from 2015. She was followed by Mary Barra, the CEO of automaker General Motors Co, who earned $22.4 million.

At the bottom of the list was Susan Story of American Water Works Co, the utility company, who earned $4.1 million.

To calculate pay, Equilar added salary, bonus, perks, stock awards, stock option awards, and other types of compensation. Equilar only looked at companies in the Standard & Poor's 500 index that filed proxy statements with federal regulators between January 1 and May 1, 2017. And it only included CEOs who have been in their roles for at least two years in order to exclude sign-on bonuses. Of the 346 CEOs in that group, just 21 were women.

'Get more women into CEO roles'

The only black woman on the list, Xerox's Ursula Burns, left the CEO role in January after the document-management company split in two. Burns, who earned $13.1 million as CEO last year, retired as chairman of Xerox Corp's board this week.

Gracia Martore, who earned $8.5 million last year, announced earlier this month that she would retire as CEO of Tegna Inc, the TV station owner and operator. Her replacement is a man.

Experts say that companies need to do more to get women into CEO roles.

Janice Ellig, the co-CEO of executive search firm Chadick Ellig, says that "unconscious bias" in the workplace is keeping women from getting opportunities that will put them on track to for top roles.

Companies need to "start recognising that gender inequality exists," say Ellig, who is also chairperson of the Women's Forum of New York.

"If you don't recognise a problem, you can't solve a problem," she says.