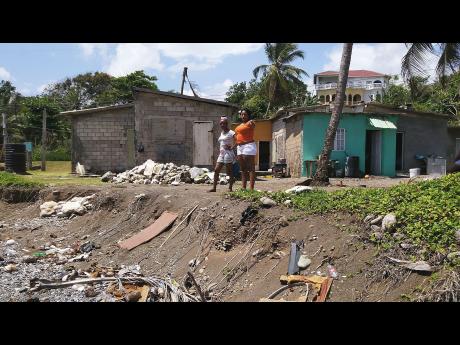 Okoye Henry
Shannel Reid (pointing) and one of her nieces stand on the edge of the remaining land space between their house and the sea.

Western Bureau:
A Portland family, whose home is now being threatened by the encroaching sea, is making an urgent appeal to the relevant authorities as well as their member of parliament (MP) for help to rectify the situation before it gets completely out of control.

The family, who resides in the Orange Bay community, spans several generations, to include a grandmother, who has been living at the location for more than 50 years.

However, time appears to be running out for the extended family, which fears that in another year or two, they will have no choice but to abandon the only home they know because the sea is rapidly eating away at the land space in proximity to their house.

"Before now, we had land (space) stretching across the yard, but as you can see now, the sea is literally in our backyard," said Shannel Reid, who was born raised in that residence.
The 29-year-old mother of one told The Gleaner that the sea level began to rise steadily some 10 years ago. This was after the authorities carried out a major road repair project which saw them putting some huge boulders along the shorelines.
"Instead of the wave washing up on the shore, it hit the boulders and the water funnel across over to us and take away the land space, so now we are in jeopardy," explained Reid. "A business place that was nearby was completely swallowed up by the sea."

The recent torrential rainfall has only added to the growing problem as the sea level is now even higher. A section of the main road in the community has been badly eroded, leaving a slender land space for vehicles to traverse.
"We have a big family with a whole heap of small children, so we need some help as quickly as possible," said Marva Jones, another worried family member.

Since the problem first surfaced a decade ago, the family said it has been desperately pleading with the Government and their MP for assistance to rectify the situation, but to date, their cries have fallen on deaf ears.

"We see people only come and look, but nothing is ever done," said the family's matriarch, 74-year-old Misrel Jones.