I never attacked Food For the Poor, says Warmington 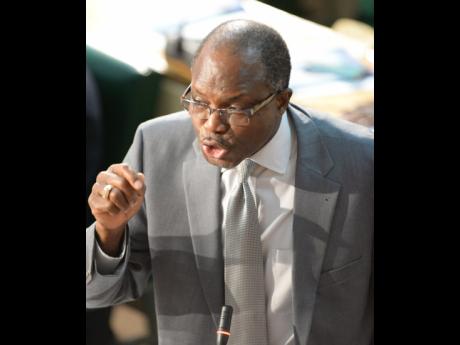 Everald Warmington, state minister in the ministry of economic growth and job creation, yesterday accused journalists of "gross dishonesty" in the coverage of last week's meeting of Parliament's Infrastructure and Physical Development Committee where he and other legislators criticised aspects of a joint-funded housing programme involving Food For the Poor (FFP).

Warmington's comments came after Prime Minister Andrew Holness on Monday joined the public in reprimanding the legislators for the "confrontational" way in which they suggested that the largest charity in Jamaica has been building houses of questionable quality.

The committee members had complained that they were being sidelined and questioned, too, whether FFP's request for a US$800 increase, on the current US$6,400 it costs to build one two-bedroom unit, was justified. Under the five-year deal signed in 2012, the Government covers 50 per cent of the costs to build each unit.

Warmington said yesterday that he never 'attacked'  FFP last week and his comments were "doctored" and splintered" by the media.

Speaking with the newspaper, Audrey Sewell, permanent secretary in the Ministry of Economic Growth and Job Creation, said: "Mr Warmington made that comment. Mr Warmington is to be asked to clarify and explain his comment."

Holness' statement Monday did not address that particular issue but noted that early discussions are to start for a renewal of the partnership when the current one expires in August.

FFP had rejected some of the allegations and CDF committee chairman Mikael Phillips later apologised on behalf of the MPs.

Yesterday he said it was "unfortunate the twists that our deliberations have taken".

"If you look at the number of houses in South West St Catherine, it appears as if I'm taking advantage of the programme being the minister in charge. It is saying now that 32 houses were built in South West St Catherine, 15 were in progress and Mr Chambers said it was in collaboration or consultation with MPs. I was never consulted and I was supposed to be the minister in charge. And the issue is there is no department of government that is supposed to be operating in anybody's constituency without first speaking with the MP and working through them. I have no idea who these 32 persons are who go these houses. I have no idea who these 15 persons are that are being process right now.

"The issue that I know is that when it changed from JEEP (Jamaica Emergency Employment Programme) to HOPE (Housing, Opportunity, Production and Employment) in September, the Prime Minister gave directive that this programme should cease for new policy direction. I was shocked when I understand that houses were still being done against the instruction that was given."

WHAT WARMINGTON SAID THIS WEEK:

"Some of what were written and attributed to members, I don't see it in the minutes here. What I said here was doctored and they (journalists) splintered what members said here and published what they choose to publish and it's unfair to all of us as Jamaicans for this type of dishonesty to be perpetrated in the news media. The news media ought to report and not to create news. At no time in the meeting had I ever attacked Food For the Poor or mentioned FFP in my statement. I responded to what was said by the director in the technical services department in the Ministry of Economic Growth and Job Creation when the director said that the project is implemented in consultation and collaboration with MPs. And I said as MP, at no time was I consulted and I said then that was not right and in the future the department is to collaborate with MPs as was intended when the programme was initiated.

"Plus, I mentioned that what was on the form was stating that for members of parliament to recommend a constituent for benefit, that has to come from a Justice of Peace. And, I'm saying that nobody elected a JP, they elected MPs, yet what was said was that I attacked Food For the Poor. At no time I said anything about FFP. Food For the Poor does not build houses for JEEP by themselves, FFP does not select beneficiaries for HOPE houses. These beneficiaries are selected, screened and approved by the HOPE secretariat. So Food For the Poor cannot be blamed if you have excess amount of houses being built in a particular constituency, and none in the other. The department that is to be blamed is the technical services department in the Ministry of Economic Growth and Job Creation and unfortunately I'm a part of that ministry; unfortunately with these things happening. Food For the Poor cannot be blamed, and that's not what I said.

"I feel very disappointed that those people in media should go out there and write and publish these stuff. Dishonest. I wouldn't even call it fake news, I call it gross dishonesty. It [has] reached the point where members of different committees refuse to talk at the committees because they're going to be slandered and all type of rubbish written about them. If the media houses cannot employ people who are professional, don't employ them.

"The instruction or directive that was channelled through me to them (HOPE Secretariat) was that there was a cessation in the selection of new beneficiaries pending a policy decision. It had nothing to do with those persons who were already interviewed an in the system."