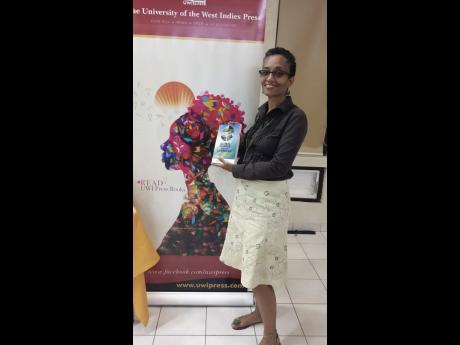 Contributed
Thera Edwards with a copy of the book 'Global Change and the Caribbean: Adaptation and Resilience'.

A NEW book on resilience building in the Caribbean, forced by the changing climate and driven by globalisation and population growth, has hit local shelves, with the goal to lend insight into regional realities and help inform future action.

Called 'Global Change and the Caribbean: Adaptation and Resilience', the book's chapters are selected from among 37 papers presented at the sixth British-Caribbean Geography Seminar Series, held at the University of the West Indies (UWI), Mona, in 2014.

It is edited by David Barker, Duncan McGregor, Kevon Rhiney, and Thera Edward, and published by the UWI Press.

The official launch took place on May 25.

For Edwards, it is a timely publication, one that comes as the Caribbean ramps up research into climate change, which has seen temperature increases in and outside of the region, rising sea levels, and threats of more extreme weather events and the related negative implications for the health of the region's population and their livelihoods.

"One of the important things is that it doesn't just look at Jamaica. A lot of times people talk about the separateness of some of the Caribbean states, so looking at different islands and countries in a comprehensive volume is important. It shows where there might be some differences in terms of contexts but also commonalities in terms of what we are facing regionally," Edwards told The Gleaner.

Among the islands looked at are St Kitts, Dominica, Guyana, Saint Lucia, St Vincent, and Suriname.

"We are also moving beyond the talk of SIDS (small island developing states) and their vulnerability to adaptation how and what we are changing about our approach and the resilience of the region. So we are not just looking at the 'poor us, woe is we'; we are looking at how are we holding up," the editor added.

An additional benefit, she said, is that it draws on the experience and diversity of people in scholarship young and old, in and outside of the Caribbean.

Among the specific issues looked at are Caribbean tourism and urban development; the 2014 Jamaica drought; banana farming in Dominica after Hurricane Hugo; social capital and rural resilience among the Carib communities in northeastern St Vincent; and local knowledge and community resilience.

"We want people to use this book to look at what is happening. It is a sort of follow-on from some of the previous volumes so just to look at how things have changed (is important)," the editor said.

"We want people to look at things like double exposure, where you look at not only the process of global change, but also climate change, both of which have an impact on the environment and the social system. We want this complete look at things in terms of what is happening in terms of world processes like globalisation and climate change and how together they have influences on the region," the editor said.

"We also want persons who are in policymaking and developers to look at what is emerging from some of the research. There are also some other things we can (all) look forward to like environmental justice, which looks at the fair treatment and inclusion of communities in the enforcement of environmental laws and policy. Similarly, there is climate justice, which sort of intersects with what is going on with environmental degradation and some of the inequalities that come out of it," Edwards added.

The book is available at the UWI Bookshop in Kingston, as well as at all branches of Kingston Bookshop and Sangster's Book Store.