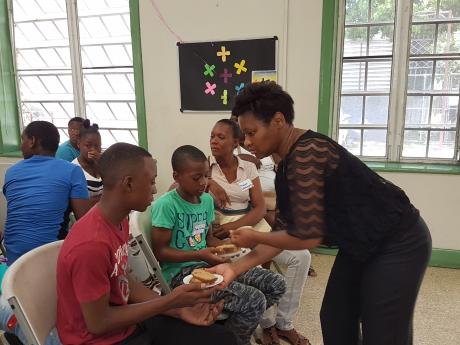 Contributed
Karen Silvera, credit officer, First Heritage Co-Operative Credit Union and Re-Birth Project Volunteer, serves lunch to parent & student participants at a recent Re-Birth Project interactive workshop held at the Webster Memorial United Church Hall. The Re-Birth Project is an initiative of Maverick Communications Limited. The project targets at-risk youth aged 12-16 years. The students are selected by their school administration. The programme employs protective strategies to encourage the youth to strive for excellence and help to buffer them against the risk factors they may be facing.

The project is aimed at engaging high-school youth who are considered at-risk, while also providing support for their parents. Students who show academic promise, but manifest maladaptive behaviours, including truancy, poor conflict skills-resolution and disrespect for authority, are selected by school administrations for participation in the programme.

The programme was designed to introduce positive influences into lives that are impacted by the effects of poor parenting, violence, poverty, high dropout rates, broken homes and fractured communities. Since 2013, The Re-Birth Project has annually targeted 20 students between ages 12 and 16 who attend weekly workshops, along with their parents, over a nine-week period.

FHC, a more-than-100-year-old institution, has been involved in the project since inception. Along with sponsorship, FHC has provided resources for the programme; presenters; including past Chief Executive Officer Basil Naar; and committed volunteers throughout the years.

In 2014, the credit union also facilitated an entrepreneurial training session and created a special back-to-school loan facility for parents in the Re-Birth Project. Through this product, parents were able to finance their children's back-to-school expenses, existing businesses or source funds to start businesses at competitive interest rates with little to no security.

Currently in phase four, under the theme 'Putting a Premium on Me', sessions have explored topics such as anger management, conflict resolution, self- esteem building, improving parent-child relationships and sexual and reproductive health. FHC volunteers Karen Silvera and Ann-Maria Deans-Clarke both agree that the Re-Birth workshops have been personally beneficial.

"I really do deem it an opportunity to participate in the Re-Birth Project,which has focused its effort on children who need assistance at a critical point in their lives. It is also most fulfilling to be part of an organisation [FHC] that, despite its own success, takes initiatives of this nature to help motivate and re-direct Jamaican youth who are effectively our future. As a parent myself, I have also benefited from the practical lessons covered by the facilitators" Silvera stated.

"The sessions have allowed me to reassess and even better appreciate my role as a parent," Deans-Clarke said.

The Re-Birth Project activities are designed to equip the parents as well as each child with skills and resources for dealing with conflict, facilitate open parent-child communication and also inspire action based on a recognised potential for excellence. Sessions include a motivational presentation from some of Jamaica's top executives, including Marcus Steele, Glen Christian and Rohan Ambersley, who inspired participants to always aim for the utmost, despite challenges.