FULL STATEMENT: DPP hits back at critics over OCG referrals 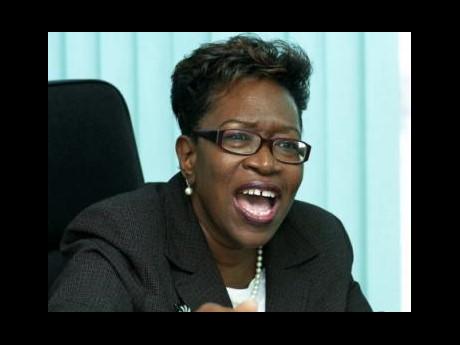 Paula Llewellyn: I consider it my duty as DPP to seek to disabuse the public of this unfortunate perception.

The Office of the Director of Public Prosecutions is refuting claims that it failed to prosecute some 40 referrals sent to it by the Office of the Contractor General (OCG).

The concerns were raised recently by anti-corruption lobby group National Integrity Action and Think Tank CAPRI, which accused the DPP of lack of action.

In a statement, DPP Paula Llewellyn said the claims are not true adding that her accusers have mischaracterised the nature of the referrals.

She explained that referrals from the OCG form no more than two percent of the total number of referrals received from entities islandwide.

According to the DPP of the two per cent, the referenced 40 cases form about 0.1 per cent.

The DPP notes that these 40 matters are not corruption cases but were matters related to administrative breaches.

Llewellyn says the mischaracterisation of these referrals as corruption cases reflects an intention to mislead the public, both local and foreign, and persons should cease and desist from pursuing this disingenuous practice. Llewellyn: The ODPP no longer gets these referrals because the present Contractor General deals with these matters himself

Recently, complaints have surfaced in the media concerning the ODPP’s failure to prosecute some forty referrals that were sent by the OCG.  These referrals were forwarded to the ODPP during the tenure of the former Contractor General, Mr Greg Christie, who submitted official reports to Parliament and issued public statements mischaracterising the nature of these referrals and criticising the posture of the ODPP in its decision not to prosecute these matters.

I have in the past sought to explain in the public domain and the relevant authorities the true nature and character of these matters, and in fact on request, forwarded a full report to Parliament on May 6, 2015 seeking to correct the misperception and explain the true position.  It is indeed unfortunate that this allegation has resurfaced in some sections of the media reflecting utterances from Professor Munroe of National Integrity Action and Ms Phillips of CAPRI a research think tank headed by Dr Damien King of the University of the West Indies.

Going forward as often as these mischaracterisations appear in the media, I consider it my duty as DPP to seek to disabuse the public of this unfortunate perception which seems to insinuate that the DPP and its officers have some sort of entrenched inertia in the prosecution of corruption cases.

Both in the past and in the present, referrals from the OCG form no more than two per cent of the total number of referrals received from entities islandwide.  This is separate and apart from the hundreds of cases that we deal with from the Circuit Courts, Gun Courts, Court of Appeal, Extradition and Mutual Assistance.  Of the two per cent  of referrals received from the OCG, the forty odd matters mentioned in the public domain form about 0.1 per cent.  These forty odd matters are not corruption cases, contrary to the mischaracterisation previously described.   They are Quarterly Contract Reports.

WHAT ARE QUARTERLY REPORTS?

Pursuant to section 17(1) of the Contractor General Act, on the 11th July 2006, the OCG issued a Requisition to all Procuring Public Bodies regarding the award of government contracts.  This was revised in November of 2008.  The requisition requires the public body to submit Quarterly Contract Report (QCA) which documents all contracts awarded above $500,000.00.

The Report, which is a form created by the OCG, includes such information such as the name of contractors, type of contracts, contract value, principal site of contract performance, procurement method and number of tenders.

A failure by any person/entity without lawful justification or excuse, to comply with a lawful requisition of a Contractor General, constitutes a criminal offence under section 29 of the Contractor General’s Act.

The offence is dealt with summarily and upon summary conviction before a Parish Court Judge, shall be liable to a fine not exceeding $5000.00 or to imprisonment for a term not exceeding 12 months, or to both such fine and imprisonment.

These matters have nothing to do with a substantial breach of the Larceny Act, the Public Utilities Protection Act, The Corruption Prevention Act or the Law relating to conspiracy to defraud or misconduct in public office.  Please refer to page 6 of the attached report sent to Parliament which clearly sets out how these matters were dealt with by the ODPP and by the Courts.

The ODPP initiated prosecution against some of the entities in appropriate cases and elected not to prosecute in others, for example where a particular entity did not have any contract activity and therefore nothing to report, though filing out of time.  The report issued to Parliament by the ODPP also details several other matters referred by the OCG and gives adequate explanation of my discretion.

These matters are classified as administrative breaches to an experienced prosecutor.   From our experience with these matters, once the offending entity provides a reasonable excuse and is not a repeat offender, the Court usually admonishes and discharges the entity or fines them up to $5000.00. Checks made as recent as today with the present Contractor General, Mr Dirk Harrison, indicate that he is enjoying 100 percent compliance in respect of public bodies submitting their Quarterly Contract Reports (QCR).

This is to his credit, being a former senior prosecutor with the necessary experience to appreciate the distinction aforementioned.  When Mr Harrison was at the ODPP with responsibility of dealing with the referrals, he worked closely with the OCG and entities to ensure compliance which is the main purpose of the Act.  There would always be room for the exercise of a discretion, which is now done by the present Contractor General and which we exercise by not prosecuting some of these matters depending on the excuse proffered by the entity.   The ODPP no longer gets these referrals because the present Contractor General deals with these matters himself as a matter of course as administrative breaches and not corruption matters, without more. LLewellyn: I would call on these persons to cease and desist from pursuing this disingenuous practice

DISTINCTION BETWEEN ADMINISTRATIVE AND BREACHES OF CRIMINAL LAW; CORRUPTION CASES
An administrative breach is where there has been a failure to observe or comply with a procedural requirement. On the other hand, cases involving corruption usually disclose some ingredient of impropriety, fraud or dishonesty as a matter of law.  Referrals submitted by the OCG in relation to delinquent public bodies for these procedural breaches are entailed in a list merely documenting the names of the delinquent entities and lapse of time for submission of the Quarterly Contract Reports (QCR).

Corruption files usually contain statements gathered after an investigation has been conducted disclosing clear breaches of the criminal law eg. Illicit Enrichment under The Corruption Prevention Act, Conspiracy to Defraud, offences under the Forgery Act and the Larceny Act to name a few.  If the referrals were analogous to offences under the Road Traffic Act, the corruption cases would be akin to the offence of Causing Death by Dangerous Driving at the higher end of the spectrum while at the lower end, the QCRs would be equivalent to the offence of Disobeying a Stop Sign.

Again I wish to emphasise that these 40 odd referrals from the OCG are not corruption cases.  They are administrative breaches which do not disclose any allegations of any ingredient of any corruption offence.  For certain entities as reflected in the news media to continue to mischaracterise these referrals as corruption cases, reflects an intention by them to mislead the public, both local and foreign, and I would call on these persons to cease and desist from pursuing this disingenuous practice.  The ODPP considers itself open to the public and accountable and strives to pursue a path of transparency.

We are not above criticism and embrace it in our effort to enhance and improve our services to the public and our professionalism.  However, for this mischaracterisation and perhaps alternative facts to be constantly elevated by certain parties as truth I consider to be mischievous and unbecoming.  We at the ODPP at all times seek to provide clarity in the discourse; I am at a loss and find it passing strange that CAPRI, a well respected research think tank, would have neglected in their due diligence to ascertain the facts from the ODPP.

UPDATE ON THE PREVIOUS REPORT TO PARLIAMENT
Since the publication of the May 2015 report to Parliament, Mr Danville Walker was successfully prosecuted by  officers of the ODPP for Failure to Comply with the lawful requisition of the Contractor General and was fined the maximum $5000 or 14 days.

Three Councillors from the Hanover Parish Council including former Mayor Shernett Haughton have been referred to the police for further investigation.

The ODPP is in receipt this year of:-

A referral of impropriety and irregularity by Seal Investments Limited. (completed)

Report in relation to the expenditure involving the Jamaica 50 celebrations (currently being researched).

WHO PROSECUTES THE BULK OF THE CORRUPTION CASES IN THE JAMAICAN COURT SYSTEM?
Please note that the 43 lawyers the ODPP including myself conduct all of the prosecutions in the Gun Courts, Circuit Courts island wide, Court of Appeal.  From time to time depending on the circumstances, we are called upon to lead the prosecution in high profile and complex cases.  The vast majority (98.5%) of corruption cases are prosecuted by the Clerk of Courts in the Parish Courts who fall under the direct supervision of the Chief Justice’s office.

The ODPP has no administrative oversight over the Clerk of the Courts and we interact with them on cases when they seek our advice in a stated matter.  Any enquiries as to the statistics, pace or rate of disposal of corruption cases in the Parish Courts should be directed to the office of the Chief Justice. Llewellyn: I am privileged to lead a dynamic group of professionals who take great pride in maintaining their intellectual rigour

RESPONSIBILITIES OF THE ODPP ANTI-CORRUPTION UNIT
The ODPP is not an investigative body and therefore it is only when we are in possession of a completed file containing legally cogent evidentiary material which reveals the basis of a viable prosecution of the matter, can criminal prosecution be recommended and thereafter initiated.  The ODPP has a small unit which deals with the following:

*Referrals from the Integrity Commission dealing with  Parliamentarians

*Referrals from MOCA (formerly Anti Corruption Branch) which are treated as priority. Currently the ODPP is involved in two prosecutions for MOCA - a complex money laundering matter and a fraud matter;

*Referrals from the OCG and the Revenue Protection Division (RPD) among other agencies and government departments.

We abhor corruption and its negative effects, however the ODPP in conducting prosecutions is obligated to act within the parameters of the law and the very high ethical conduct that is required as a prosecutor.  Though we may be outraged and even militant against incidents of corruption from any quarter, that cannot form a part of the assessment of decisions to prosecute or not to prosecute. We are guided by protocols (please see www.dpp.gov.jm)  and we can only go forward with a prosecution in any matter if the evidentiary material is at the requisite standard and it is in the public interest to proceed with that prosecution.

I am privileged to lead a dynamic group of professionals who take great pride in maintaining their intellectual rigour in the assessment and conduct of our prosecutions and who execute their functions with integrity in what is a very challenging work environment.

I hope that this document and a copy of the report  have shed light on the issues and so long as these mischaracterisations of our functions are repeated I will continue on behalf of our office to correct the record.