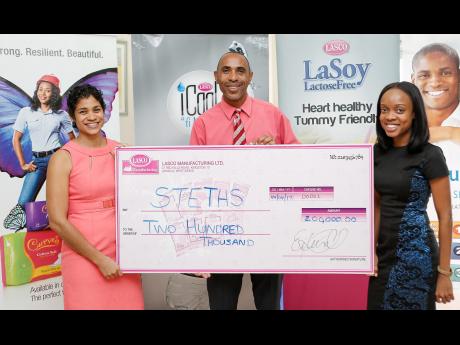 The newly formed SAF received the donation when the WeInspire Girls School Tour made its official stop at the home of the reigning LASCO Principal of the Year and Teacher of the Year.

STETHS Principal Keith Wellington expressed gratitude for LASCO's continued support and investment in youth and education. "The LASCO group, through its product lines as well as its corporate policies, is undoubtedly Jamaica's number one corporate citizen where support for family life is concerned," Wellington said.

"The contribution from LASCO epitomises its support and belief in Jamaica's youth, their education and general well-being. As a school, we are committed to every child and will fully support our partners like LASCO who continue to support our various initiatives to nurture true champions at STETHS. Thanks, LASCO!" Wellington added.

LASCO's donation forms part of its support for the wider school community, to go along with the individual prizes. The two top educators received among their prizes personal and professional development opportunities to attend the Association for Supervision and Curriculum Development (ASCD) Professional Development 2017 conference in Anaheim, California.

According to Catherine Goodall, LASCO marketing manager - beverages, giving is second nature to LASCO. "LASCO has been supporting education for over a decade through our ambassador programmes, school adoptions and sponsorships. The LASCO family is very aware of the current economic challenges faced my many families today, but we strongly believe that every child can learn, every child must learn. Principal Wellington has always had a heart and a passion for his students and that makes it easy to support STETHS," Goodall said.

The SAF is a fund STETHS established as a part of the school's 55th anniversary celebrations this year to assist needy students with school expenses including meals, transportation, and examination fees.

It is estimated that as many as 500 of the 1,600 students require assistance in order to attend STETHS regularly and the SAF will be targeting this group.

The SAF was officially launched on Saturday, April 8 at the 55th anniversary banquet of which the proceeds, approximately $750,000 from dinner tickets and $300,000 in pledges (inclusive of the LASCO donation) was raised for the fund.