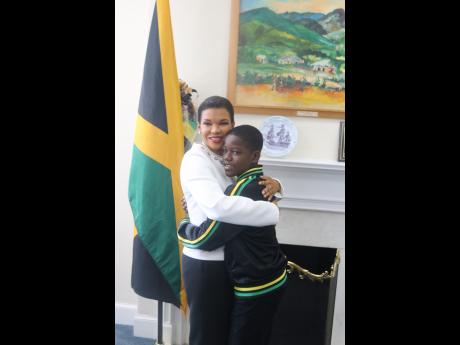 Contributed
Jamaica’s Ambassador to the United States Audrey Marks (left) embraces 12-year-old Deneiro Hines Jamaica’s participant in the just concluded Scripps National Spelling Bee competition on his arrival at the Embassy of Jamaica, where he paid a courtesy call on the ambassador. 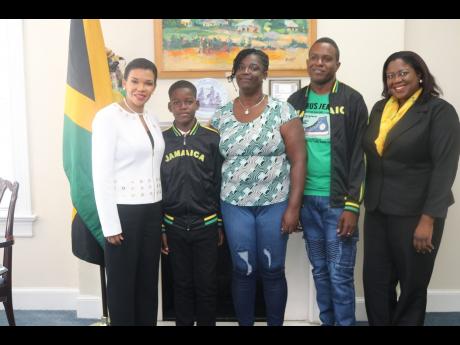 Jamaica's Ambassador to the United States Audrey Marks has praised The Gleaner Company for its continued development of the Spelling Bee competition and its sponsorship of the country's participation in the Scripps National Spelling Bee Competition in Washington, DC.

"The Gleaner's commitment speaks volumes of its stalwart contribution towards encouraging our nation's young people to raise their level of engagement and helping to give them exposure on to the international stage," said Marks last Friday, while welcoming Deneiro Hines, Jamaica's 12-year-old entrant in the 90th annual Scripps National Spelling Bee competition, to the embassy in Washington, DC.

His coach, Errol Campbell, mother Carolyn Williams, and The Gleaner's assistant manager for business development and marketing, Terry-Anne Wilson, were also on hand.

Marks invited The Gleaner Company to partner with the embassy to develop a programme for young people from Jamaica to visit the United States, as part of the 60th anniversary of the Spelling Bee competition in Jamaica next year.

The proposed programme would provide an opportunity for parish-level spelling bee winners to get overseas exposure.

Turning to Deneiro, Marks said: "You are an ambassador for your country. We know you did your best and we are proud of you."

She also congratulated Deneiro on being the champion of The Gleaner's Children's Own All-Island Competition 2017, and had high praise for his coach.

"Jamaica is grateful for your contribution in the development of the Spelling Bee competition," Marks told Campbell.

Deneiro, who is from Glenmuir High School in Clarendon, said he felt honoured and proud to represent his country at this national Spelling Bee competition and promised to do his country proud.

For his part, Campbell said he was gratified that his student was a part of the Spelling Bee programme, and that placing 41st out of 291 finalists is a significant achievement.

Wilson noted how the spelling programme exposes students to the international arena, and The Gleaner's commitment to the children.

"Part of The Gleaner's commitment is to continue to help Jamaica to develop good citizens, and if we begin with the children by getting them involved in the Spelling Bee competition, we will develop children who will think and reason, and ultimately we will have a better country; and that is why The Gleaner continues to give solid support to the Spelling Bee competition."

Held at the Gaylord National Resort and Convention Center in suburban Washington, the 2017 competition began on May 31 and ended on June 1 with 12-year-old Ananya Vinay of Fresno, California, beating a field of champion spellers from all 50 US states, the District of Columbia, US territories American Samoa, Guam, Puerto Rico, and US Virgin Islands, as well as Department of Defense schools in Europe.

Besides Jamaica, other countries that had sent contestants were The Bahamas, Canada, Ghana, Japan, and South Korea.

Trump reinforces bond between Jamaica and US
Jamaica to strengthen relationship with new United States government
Audrey Marks invests in future education
Love Self, Love Others
Graduation 2015: You are Perfect, Believe It, Ambassador Marks