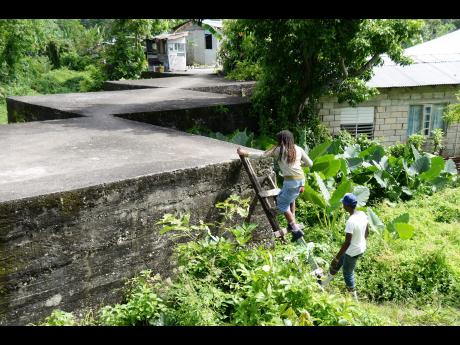 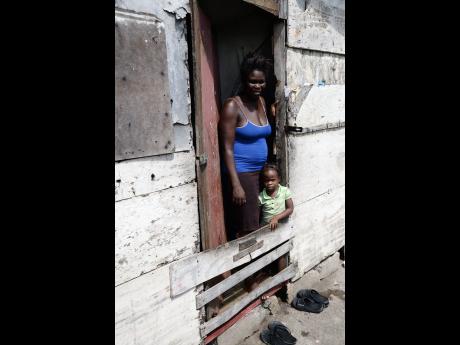 Jermaine Barnaby
Stacey-Ann Wellington and her daughter at their house in the squatter community of Diamond on the Buff Bay River in Portland. 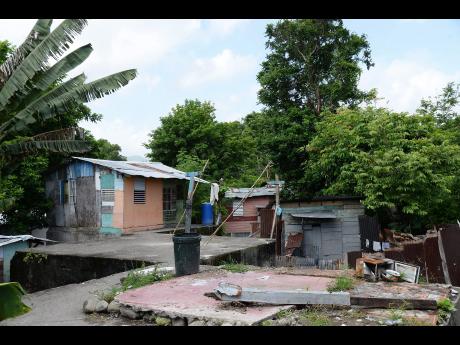 Jermaine Barnaby
Built on concrete structures put in to control the Buff Bay River, the community of Diamond in Portland is in need of urgent attention.
1
2
3

No bathrooms, ladders needed to get from one house to the next, no electricity, no roads, and houses perched on concrete structures put in many years ago to contain the Buff Bay River. That is life for the more than 100 residents, including children, of Diamond, an informal settlement in Buff Bay, Portland.

The residents live in approximately 45 one-room houses made of zinc and board precariously perched on diamond-shaped concrete structures, from which the community got its name.

Intertwined in the community is stagnant water, fowl coops and hog pens, but as one resident, 22-year-old Shadrach Skyers, explained, they have nowhere else to go. "The condition of the place isn't right. If we get hard rain for a month we might wash away, and there are mosquitoes breeding up, but a lot of us don't have anywhere else to go."

Accessing the houses in Diamond is like negotiating an obstacle course, with the ladders having to be used in some areas to get from one side to the other. And while movement within the informal community is difficult by day, it is even more so in the nights when the place is transformed from an obstacle course into a deathtrap, largely due to the absence of electricity or lighting.

"My kids have fallen off here and fractured their hand and foot, and even me drop off and end up in hospital after fracturing my neck," 28-year-old mother of four, Lisaye Kennedy, shared with The Sunday Gleaner team during a visit to the area last week.

But falling is not the only danger children living in Diamond and others who squat along the riverbank face, as with no running water most persons use outside bathrooms while some do not have any bathroom at all.

These factors form a recipe for children and even women to be sexually assaulted.

"There are plenty children living here with some of them not even going to school," said Devon Hudson, who has been living in Diamond for more than 40 years.

"Their parents don't have any jobs and are suffering so they just stay home and man just breed them," added Hudson.

Norma Baugh said the safety of her six children and others within the area is something that constantly concerns her. She believes that if parents are not extremely vigilant, especially in such an environment, their children can go astray, as was the case with a 13-year-old girl who a few years ago had a relationship with an adult male in the community, despite her parents also living there.

"I am concerned as the riverside is right there and we have a whole heap of bush," said Baugh.

"I have five girls and one boy and I keep them to me. So even though we have outside restrooms, during the nights we don't have to come out back to use the bathroom as we have something that we carry in to use."

Baugh said there have been numerous reports of children being sexually abused, not just in Diamond, but also in neighbouring communities, with some having gone before the courts only for the parents to not follow through with the process.

"It will reach court and instead of the parents encouraging the girls or bringing them to court they taken them away and just done with it, and if they are offered money they are going to take it," added Baugh.

The dire situation facing children in the area was illustrated by Shantel Grey, 16, and Sashannell Warmington, 17. Both girls, who are pregnant and have dropped out of school, used to live in Diamond but now share a one-bedroom dwelling right next door to the settlement with Grey's brother, mother and stepfather.

The 16-year-old Grey said she regrets having become pregnant at such a young age, which resulted in her father deciding she should stop school. But for the 17-year-old Warmington, quitting school was a decision she made.

"Mi stop go school inna grade 10 because two girls use to trouble mi and I couldn't bother with it," said

Warmington is in a relationship with Grey's stepfather's brother.

According to Stacy-Ann Wellington, who has three children ages 12, 10 and two, assistance has been sought from the political representatives in the past but none has been forthcoming. She is calling on the Government to make land available and lease it to the persons living in Diamond.