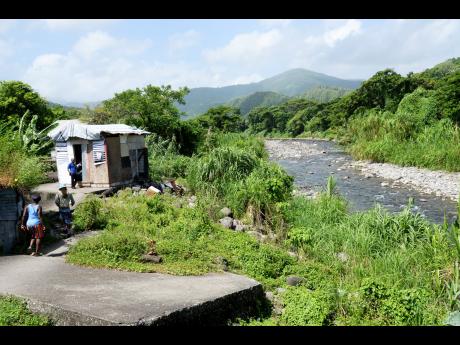 Jermaine Barnaby
The Buff Bay River which is flowing in the background, is posing a threat to residents of the Woodstock Housing Scheme in Portland.

Residents of the Woodstock Housing Scheme in Buff Bay, Portland, are calling for something to be done urgently to save their land, which is being gradually eaten away by the water from the Buff Bay River.

The river, which initially flowed along a course behind the informal settlement dubbed 'Diamond', has long changed its course and is now eroding properties in the Woodstock scheme.

"The river is a threat to the scheme, as it is not running in its proper channel and is eating away some of the land of some of the homeowners in the scheme," Vinnette Mitchell-Forrester, public relations officer for the Woodstock Citizens' Association, told The Sunday Gleaner.

"We have written letters and persons have come in and looked at it and nothing. Every time there is heavy rain or a hurricane, some of the persons' lands go with the water as the river is coming closer to the scheme," added Mitchell-Forrester.

She argued that the river needs to be dredged, as the Gideon baskets and curve and channels which were put in have been washed away and the water is now heading for the houses.

Member of Parliament for the area Daryl Vaz, told our news team that while he is well aware of the issue, the estimated $25 to $30 million required to execute the required river training has not yet been identified.

"It (river training) is our responsibility at the National Works Agency (NWA) but it is a factor of funds," said Vaz.

"River training is a major issue not only in Portland, but all over, as a result of the weather events that we have had."

Vaz, who is the Cabinet minister with responsibility for land, environment, climate change, and investment, said closer attention must be paid to the country's rivers now that the stream flow is much more than expected and communities are closer to the rivers than what obtained before.

"River training and support for river banks must become a part of the climate change discourse and funding," said Vaz.

"I have included specifically in all my discussion with the multilaterals on issues such as beach erosion the issue of river training, as it's as important as all the other areas that are being identified for climate change resilience.

"There is quite a bit of grant funding that is available through the various climate change funds, and that is being targeted from a policy directive, for which I have responsibility, and hopefully, we'll be able to address some of these critical issues that have not been addressed by the NWA because of the constraints," added Vaz.

The West Portland MP said he is optimistic that within the next 18 months, the Government will be able to access grant funding from the Global Climate Fund, with the Buff Bay River being one of the areas to be given priority treatment.

"What I will do is try to work with the NWA to put equipment in there to redirect the river, which is a temporary solution, but it does take some pressure off the speed of erosion, and this is what we have had to do over the years," Vaz said.