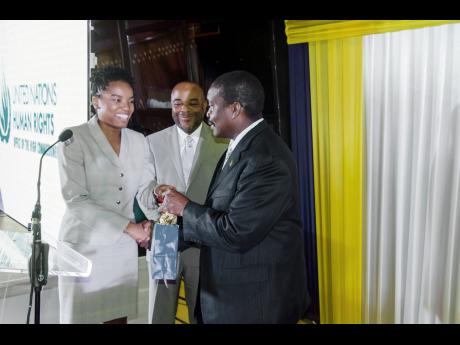 Contributed
National Security Minister Robert Montague (right) accepts a gift presented by attorney-at-law at the Independent Commission of Investigations (INDECOM), Courtney Foster, on the final day of the agency’s three-day ‘Use of Force in Law Enforcement’ Conference on June 2. The three-day forum was held at the Jamaica Conference Centre, downtown Kingston. Looking on is INDECOM Commissioner Terrence Williams.

National Security Minister Robert Montague has lauded the police for complying with the Independent Commission of Investigations (INDECOM) regulations and Jamaica Constabulary Force (JCF) use-of-force policy, which has resulted in fewer fatal shootings.

Citing INDECOM statistics, Montague said there has been a notable decline in fatal shootings by the police over the last six years, according to a Jamaica Information Service release.

"In fact, there has been a significant reduction in fatal shootings between 2013 and 2014, with a 55 per cent reduction, and a further reduction in 2015 resulting in a 60 per cent downturn when matched against the 2013 figure," he said.

The minister was addressing the final day of the three-day INDECOM's 'Use of Force in Law Enforcement' Conference on June 2 at the Jamaica Conference Centre, downtown Kingston.

Montague said that for 2014, 19 persons from the security forces were charged with murder, noting that this number fell to five in 2015.

He said the figure was further reduced to four in 2016, adding that since the start of 2017 only three police officers have been charged.

"Indeed, there has been a notable decline in suspicious fatal shootings by the security forces ... my commendations to INDECOM and to the police," he said.

The minister said those and other statistics emphasised that INDECOM was enhancing the JCF's work. This, he added, dispelled misconceptions that INDECOM was impeding the police in carrying out their duties.

Meanwhile, Montague advised that the national security and local government and community development ministries have reached an agreement that stipulates the construction of police posts or installation of closed-circuit television systems in housing developments with over 400 units.

"So as persons make their applications to the local municipal authorities, this will now be a condition of approval," he said.

The minister emphasised that this was necessary consequent on the number of housing developments being constructed without developers taking into account some of the critical infrastructure, such as adequate security features, that were needed.

He said the decision was part of his ministry's five-pillar crime strategy regarding situational prevention. This relates to measures that reduce the opportunities for crimes through spatial intervention.

The conference was undertaken with support from the United Kingdom's Department for International Development, the United States Embassy and the United Nations office in Jamaica.

It was held to draft a model use-of-force policy and to encourage implementation or improvement of legislation and policies regarding use of force by Caribbean security forces.

It was also meant to provide information regarding use of force in upgraded training programmes, and assist supervisors and oversight institutions in their scrutiny of the use of force.