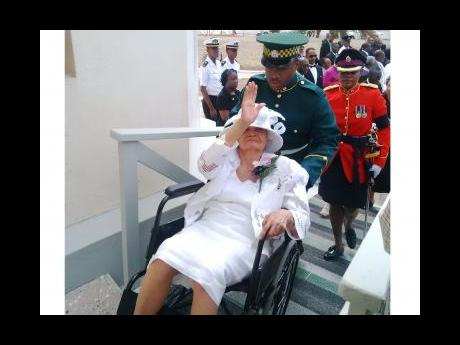 Minister of Education, Youth and Information, Ruel Reid has paid tribute to the life and work of Lady Ivy Cooke who died yesterday at the age of 100.

Reid noted that the former Ivy Tai graduated with honours from Bethlehem Teachers College in the early 1930s and went on to spend 43 years teaching.

She was also the first person from Jamaica to study child development at the Institute of Education, London University.

Reid added that Lady Cooke, along with her late husband, former Education Minister and Governor General Sir Howard Cooke spent their early years as educators in the small community of Bell Castle, Portland, where they earned the respect of students and the wider community alike.

He said this was as much for their giftedness as teachers as well as for their humility and community involvement.

“Lady Cooke lived a life of exemplary service and commitment to the people of Jamaica,” said Reid as he extended condolences to Lady Cooke’s children, grandchildren and other members of her family.

In the meantime the opposition People’s National Party in its tribute said Lady Cooke’s contribution to the life of our nation cannot be overstated.

“There is no one who was fortunate enough to have met this remarkable woman who was not immediately struck by her elegance and quiet dignity, or moved by her charm and infectious smile,” said the PNP in a release.

“Prior to being thrust onto the public stage, Lady Cooke had already made a name for herself as an outstanding scholar who later developed into a superb educator, and one who was dedicated not only to the task of enlightening young minds, but also to tending to their welfare.

“She was always very aware that instruction in and of itself was not enough, and that this had to be accompanied by a conscious effort on the part of the teacher to create a warm and embracing environment in which a child could thrive,” added the PNP.