Gangs responsible for almost half of murders in Hanover 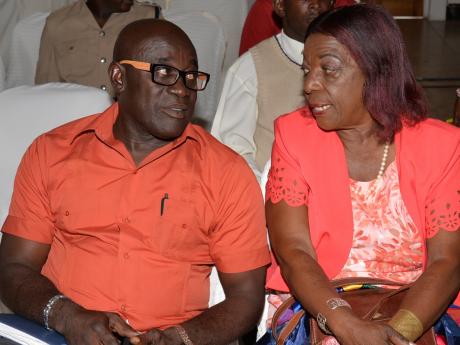 Mayor of Lucea and Chairman of the Hanover Municipal Corporation, Sheridan Samuels, speaks with chairman of the Lucea Development Initiative, Nerris Hawthorne shortly before the start of the forum in Lucea. - Photo by Okoye Henry

The Ants Nest, 100 Rounds, One Link, and One Voice gangs are responsible for approximately 13 of the 31 murders which have taken place in Hanover since the start of the year, according to Divisional Commander of the Hanover Police Division Sharon Beeput.

Beeput said 12 of the 31 murders have taken place in the Lucea police district and eight in the neighbouring Kingsvale police district. Her comments came at a Light on Violence Forum now under way in Lucea.

Kevin Watson, of the Area One Joint Task Force on Lottery Scamming, says there has been a decrease in lottery scam activities, but the residual effect is that conflicts are triggered as scammers, who have already purchased weapons with their ill-gotten monies, go to war with each other over the spoils which have become scarce.

"It is not lucrative as it once was, so there is more conflict. The spoils are now more valuable to the gang members," Watson said.