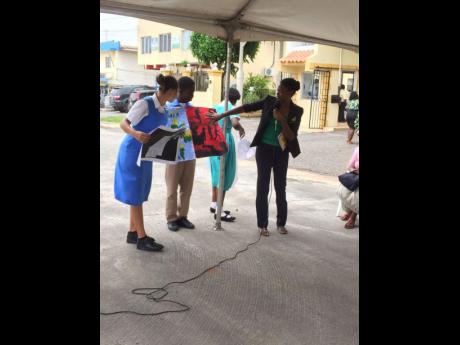 Contributed
Sandria Watkis Madden shares a moment with students at the project training centre in Mandeville.

At the Clarendon Inter Agency's review meeting held recently at the St Gabriel Angelical Church Hall in May Pen, Clarendon, Sandria Watkis Madden of the Dispute Resolution Foundation (DRF) gave a glowing report on the impact the foundation was having on schools in the parish. The foundation also powers the School Intervention Programme (SIP).

Rural Xpress caught up with her after her presentation for a one-on-one on the work carried out. SIP, as explained by Watkis Madden is a behaviour modification programme which exists as a vital limb of the DRF with the goal of developing a peaceful culture in Jamaica by identifying at-risk young persons between the ages of 10-18 and providing them with child-friendly alternative dispute resolution services and training.

The Clarendon office of the DRF, which serves more than 42 schools across three parishes - Manchester, Clarendon and St Catherine - three police stations, and two places of safety has admitted more than 152 students into the programme since January of this year.

Some of the students were on suspension and 21 required intervention.

The team, according to her, carried out conflict resolutions in schools and other organisations, several parent-child sessions and mediations.

Watkis Madden said poor communication and lack of respect for self and others were the main contributing factors for the students' deviant behaviours.

A critical role for parents Watkis Madden said parents should play their part in curbing the behaviour of their children.

"They can help by being more involved in their children's lives. It is based on our policy of not accepting any student into the programme without him or her being accompanied by a parent/guardian why most of the parents know that their children/wards are on suspension," she said, adding that of the 173 students enrolled in the programme since January, 62 of them had fathers who were not active in their lives, 11 had inactive mothers and five had both inactive mothers and fathers.

"Parents need to get involved in parenting sessions as well as conflict resolution sessions which will enable them to be better able to parent their children and help them resolve conflicts effectively," she said."

She said that reducing conflict/aggression in schools is not a DRF thing -- it's everybody's thing.

"Everyone must see this as a priority and work together to reduce it. Every parent, every school-based professional and all other stakeholders must pay an active role in order to reduce conflict in school. After all, if the children are our future, what kind of future will it be if they don't know how to resolve conflict effectively?"