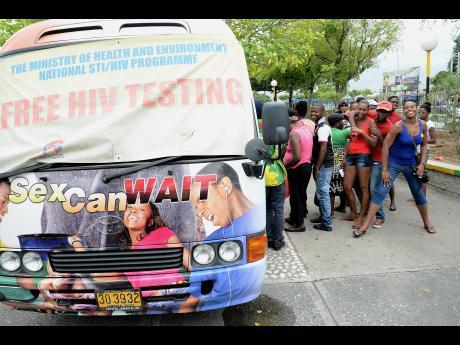 In this 2016 file photo, persons at Mandela Park in Half-Way Tree, line-up to get free HIV testing during a World Family Doctors Day fair.

The Ministry of Health is to roll out, within a month, a new public education campaign targeting persons diagnosed with HIV to accept treatment and follow-up care.

Head of the National HIV/STI Programme in the Ministry of Health, Dr Nicola Skyers, told The Gleaner/Power 106 News Centre that Jamaica has a big problem with getting persons diagnosed HIV to go on treatment.

Skyers says this is having an impact on the transmission of HIV among the population and must be addressed if the country is to reduce HIV infections in a significant way.

Skyers says people shy away from treatment and follow-up care due to stigma and the fear of discrimination from healthcare workers, denial and challenges that exist with service within the healthcare system.

Head of the National HIV/STI Programme in the Ministry of Health, Dr Nicola Skyers

The head of the national HIV/STI programme also says the health ministry has now changed the way in which HIV treatment is administered.

She says the health ministry will now place persons on treatment immediately upon diagnosis.

Previously, there was a waiting period between diagnosis and treatment.

Meanwhile Skyers says Jamaicans continue to refuse to use condom during sex.

Skyers says this practice has not only placed persons who have multiple sex partners at a high risk but persons in monogamous relationships as well.

She says the tendency is for persons in monogamous relationships to have sex without condoms, but that is a mistake because they too are at a high-risk of contracting HIV/AIDS.

The UNAIDS Jamaica's office on Tuesday highlighted the problem as a major impediment for the island in the fight to reduce HIV infections.

In a report last week its Special Envoy on HIV to the Caribbean, Dr Edward Greene, identified Jamaica as one of two countries where HIV infections increased in 2016.

However, the health ministry has said there was no increase.