Some Hanover business operators support for fight against scamming questioned 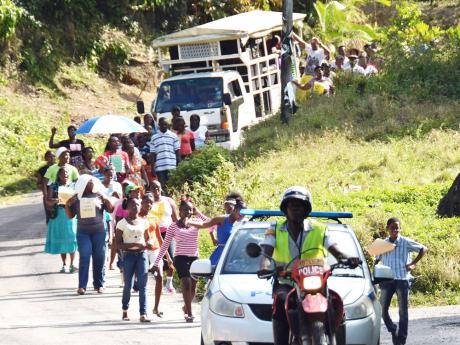 in this file photo, police leads residents of several communities in Hanover in a march against crime and violence.

A prominent Hanover businesswoman has charged that many businesspeople in the capital Lucea do not care about being involved in social programmes to stem lottery scamming because they benefit financially from the proceeds of the crime.

Businesswoman and philanthropist, Nerris Hawthorne, made the comment during the special Gleaner forum, Light on Violence, in Lucea, yesterday evening.

She notes that many of the businesses in the town are operated by Chinese nationals who are not very involved in the community.

Hawthorne adds that they aren’t getting involved because their businesses are thriving alongside lottery scamming.

However, a Jamaican businessman of Chinese descent, who was in the audience, challenged Hawthorne’s assertion, noting that he and other Chinese-Jamaicans are involved in the community.

Hawthorne later clarified that her comments were made in reference to new Chinese immigrants.