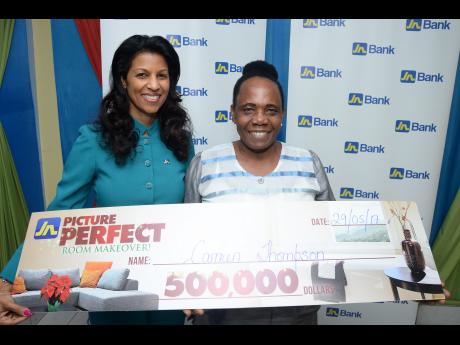 Contributed
Carmen Thompson (right) shares a big smile after being informed that she was one of the winners of the JN Picture Perfect Room Makeover Promotion. Sharing in the moment is Suzanne Hendriks, brand specialist, Jamaica National Group. 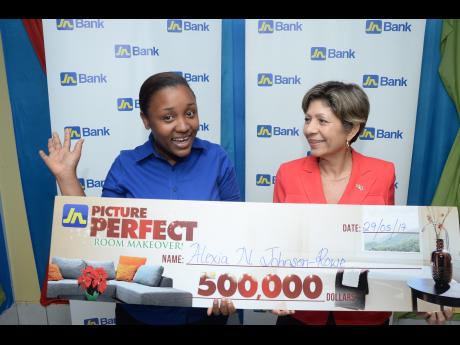 Six Jamaica National (JN) Bank members were each awarded a $500,000 room makeover in the JN Picture Perfect Room Makeover Promotion, which ran from November 2016 to March 2017.

The six winners, who were selected from across the island, were officially presented with their prizes on Monday, May 29, at the JN head office on Constant Spring Road, St Andrew.

Alexia Neteisha Johnson-Rowe was elated about her selection as one of the winners. "It is a rare experience. This is the first time I'm winning anything," said the St James resident.

Johnson-Rowe, who has been a JN member for nine years, said she would use her prize to make over her bedroom.

Carmen Thompson, a cook from Grange Hill, Westmoreland, was equally surprised when she was informed that she was a winner. "I was at the beach when I got the call. I was frightened, as I didn't expect it," she said.

The mother of four, with two grandchildren, will be using her prize to make over her bedroom and will be getting a television, bed set, night table, sofa and chest of drawers.

For new homeowner Everton Williams, this is a dream come true. "I was taken aback when I got the call and thought it was another scam. After coming off the call, I did extensive research and realised that the promotion was legitimate, and I began to mellow," he shared.

Williams, a valuation surveyor, will be making over his kitchen and expressed gratitude as he explained that all his finances went into purchasing his new home.

"Furnishing a home can be expensive and this promotion was intended to reward our members in a meaningful way," she said.

Under the promotion, persons could qualify if they were an adult member of JN, holders of JN Mortgage Loan Account or Term Share Loan Account or a Personal Unsecured Loan Account, and whose loan of at least $100,000 was disbursed during the period.

The promotion was also open to JN adult members who spent a minimum of $100,000 on their JN Visa credit card.

The other winners were Steve Rochester, Sydano Field and Novelyn Sutherland.