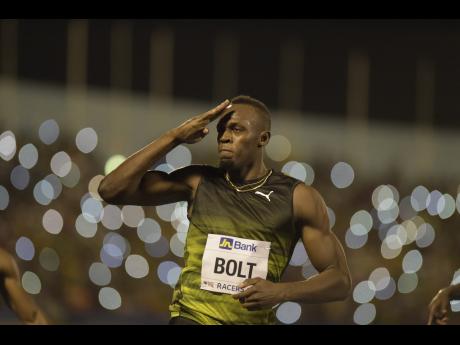 Like he has done so many times before, Usain Bolt crossed the finish line in front, as he closed the book in what was his final race on local soil at Saturday’s JN Racers Grand Prix at the National Stadium.

But not before his usual theatrics at the start.

A ‘To di worl’ pose as he was being introduced, Mo farah darting on the infield, GoPro camera in hand to get his vantage point of the historic moment; it was the sort of end everyone expected and the fireworks that met his 10.03 seconds win at the finish line was symbolic of the most exciting career in track and field.

Javaughn Minzie was second in 10.15 with Nickel Ashmeade running third in 10.18.

“I really appreciate you guys for coming out and supporting me. After my friend’s death it was really hard for me, I have never been through something like this, I had to take some time but I knew what I had to do and I knew Germaine (Mason) would want me to do this. This was special,” said Bolt after his event.

“There are no words, from World Juniors the support that I have been getting from Jamaica has been remarkable. I could not have done this without my parents, my friends, my best friend NJ, I want to thank Jamaica, I never expected this. It’s big to see everybody turn out, it shows that they appreciated what I did and it was a honour for me,” Bolt added.

It wouldn’t be a Bolt 100m without a poor start and so-so first phase, but as he has done over the years, the big Jamaican took control of the field and powered home, returning to kiss the stadium track before addressing the crowd.

Yohan Blake got his share of the limelight with a 9.97 seconds win in his 100m event leading from start to finish to get the better of Akani Simbine, 10.00 and Keston Bledman, 10.22.

“It has been going really good for me. Usain told me before I came out here, 'Blake stay patient' and that's what I did," said Blake.

The South African 400m world record holder was in complete control, ahead of Rasheed Dwyer, who was second in 20.11 seconds.

Demish Gaye continued his fine form with a 44.73 seconds run in the men’s 400m. Lalonde Gordon was second in 45.18, while Machel Cedenio took third place in 45.57 seconds.

Willy Tarbei pulled off one of the talking points of the night when he pipped world record holder David Rudisha on the line to win the Men's 800m.

Christian Taylor took the male equivalent in 17.20m with Allyson Felix running strongly for the women’s 400m win with a time of 50.52.

Hyde, who ran a personal best 48.52 at the Jamaica International Invitational on May 20 also at the National Stadium, finished second in 48.82. The race was won by Quincy Downing of the US in 48.13. Jonny Dutch of the US was third in 49.00 while fourth went to Jamaica’s Roxroy Cato in 49.43.

"I am pleased with my performances so far this season as I am running much better than last year, as I am consistently running 48 seconds, compared to last year. I am healthy and I am looking forward to trials as I think I am on the right path", Hyde said.