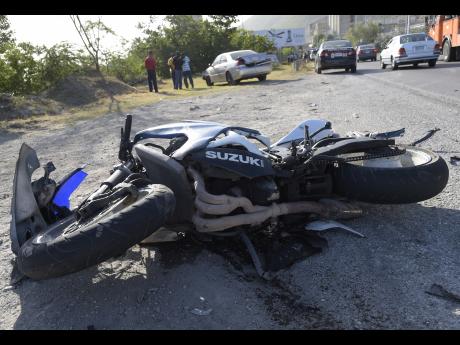 Gladstone Taylor
This bike on the Norman Manley Boulevard last Friday marked the scene of yet another motor vehicle accident. Luckily there were no fatalities from this crash.

Executive Director of the National Road Safety Council (NRSC) Paula Fletcher is urging parliamentarians to speed up the passage of the proposed new road traffic legislation.

According to Fletcher, it would be "shameful" if 2017 ends without the bill being passed.

"The legislation period to birth a new act has been much too long - over a decade in the making," said Fletcher.

"The NRSC initiated the review of the current act and has been an integral part of the process for its preparation. There are several quality improvements and additions that will energise and provide new tools for road-safety work," added Fletcher.

Both the Government and the parliamentary opposition have given their blessing to the new legislation, which will repeal and replace the existing 1938 Act and will establish new offences as well as provide increased penalties for current wrongdoings.

"For example, it will provide a new way of driver training and testing, and new manuals have already been prepared and are ready to go for this and also for a system of certifying driving instructors. There is also a new modernised road code raring to go. There will also be a provision for driver retesting," noted Fletcher, who has long argued that the new legislation would go a long way in preventing some of the disasters that plague the nation's roads on a daily basis.

She argued that parliamentarians also need to take an urgent look at the traffic-ticketing system.

"The traffic-ticketing system remains a contentious issue as tickets are being issued, but there remains an unsatisfactory level of ticket payment. Persons exist with more than 1,200 unpaid tickets and some magistrates hesitate or refuse to issue warrants as they are unsure if the tickets were actually paid," said Fletcher.

"This cannot continue, and the NRSC, again, issues the call for a sole entity to be named to manage the issuance of traffic tickets. When we have a new act, persons with unpaid tickets will not be able to renew their licence or pay their vehicle registration," Fletcher warned.

Since the start of this year, 141 persons have lost their lives in road traffic accidents. This is 12 per cent fewer than the number of road deaths recorded across the island during the corresponding period last year.