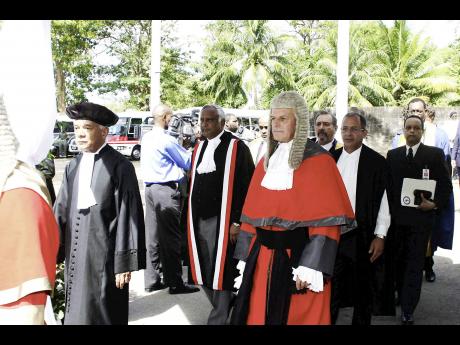 The Opposition People's National Party (PNP) is warning that the current impasse between the government and judiciary over outstanding pay is constitutionally dangerous and must be resolved immediately.

In a release this afternoon, Opposition spokesman on Justice, Senator Mark Golding, called on the Government to immediately finalise the outstanding package of pay and other benefits owing to the judiciary, in keeping with the recommendations of a December 2015 report of the Independent Commission.

"The current impasse now sees the judges, who have become frustrated to the breaking point from being ignored by the Government, publicly threatening to take the Government to Court to get what is due to them," Golding lamented.

"This situation is both unprecedented and constitutionally dangerous. In our constitutional system, the Judicial branch of the State is to remain independent, and stay above the fray. It is highly undesirable for the Judges to be forced to descend into a contentious public quarrel  over their emoluments, even having to threaten litigation against the Government," he continued.

The Opposition spokesman said the Judiciary Act was designed to avoid situations like the present by recommending three-yearly updates in the emolument packages for members of the judiciary.

As reported in today's Sunday Gleaner, judges have written to Prime Minister Andrew Holness demanding immediate action regarding outstanding payments due to them based on a recommendation of the Independent Commission in 2015.

In the letter to Holness, the judges reportedly warn that they will take legal action if steps are not taken to implement an agreement for the speedy payment of the outstanding amounts agreed to when they met with him and Governor General Sir Patrick Allen on April 6.

The judges have reportedly put together a crack team of lawyers to represent them in what they say is their fight to get justice.