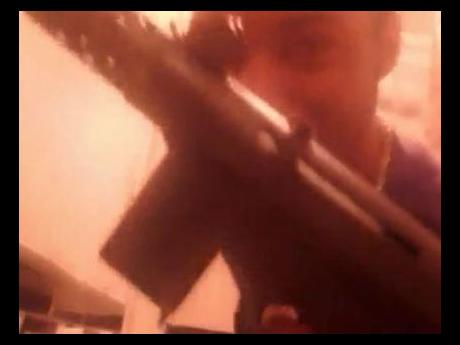 WESTERN BUREAU:
Residents in Negril, Westmoreland have identified Ayele Russell as the man in an online video seen showing off high-powered guns and boasting about his ability to use them.

Russell allegedly murdered his girlfriend and buried her beneath the floor of his West End home in the resort town.

A photograph shows the man posing with two rifles.

As he flirts in the video, telling a "girl" he loved her, Russell could be heard saying "wang! wang! wang! wang!” seemingly imitating the sound of gunfire.

The  man then proceeded to show a loaded magazine and what appears to be an UZI sub machine gun, while boasting about the power of the weapons and how much he wanted to fire them.

Russell would later describe himself as a man with two distinct personas – good and evil.

"Me is a man who just haunted, yuh see mi! Girl yuh nuh understand mi, girl. Mi love laugh and t'ing but yow, there is total different sides of me, there is a evil side and there is a good side. Mi love you, mi love you, mi really do love yuh," the man said, while holding another weapon close to the camera.

Acting on information, last Wednesday, the police went to Russell’s house, in the Pee Wee Lane section of West End in search of his girlfriend, 24-year-old Nadian Dyer and her three-year-old daughter, Orlandie Malcolm, who were last seen in Russell’s company two months ago.

The police allegedly kicked down the door to the room, which Russell and Dyer occupied and were hit by a stench caused by partially dried blood on the walls and the floor of the room.

Following a search, a grave was located under a bed.

Dyer’s body was subsequently found in the grave, wrapped in several garbage bags.

"Like you, we have seen the video and we are quite disturbed by what we have seen in it. We are not going to confirm or deny that the man in the video and photograph is Russell. That is something that the experts will do," said a Negril-based policeman, who asked not to be identified.

"However, based on all the circumstances, we would really like to locate Mr Russell," he said.

It is believed that Russell left the island close to two months ago for the United States of America.