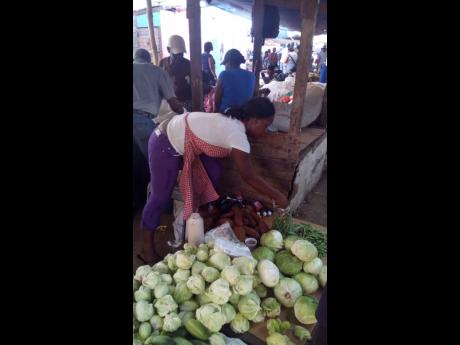 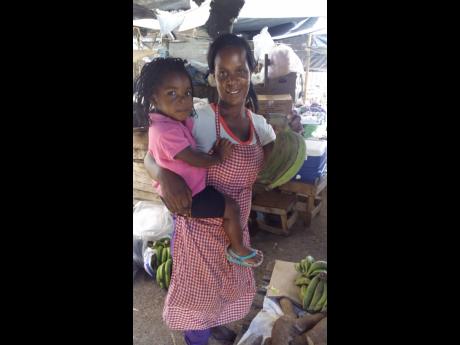 The contribution of market vendors to economic growth is often overlooked by some, especially those vendors who buy in bulk from other farmers and then sell to the final consumer.

For Jody Ann Pottinger a 30-year-old farmer, market vendor and mother of three children - one boy and two girls ages two, seven and eight - who hails from St Ann, travelling to the Spanish Town Market to sell a wide variety of agricultural produce has been her economic mainstay for the past five years.

While Pottinger is quick to admit that the business has its ups and downs, she will follow up with an acceptance that the little she does goes a far way in backing up her significant other, who is the father of her children. For this reason, she undertakes the trip from St Ann to Spanish Town every Thursday, Friday and Saturday, often with the younger of the three by her side.

"I started five years ago cultivating crops like vegetables, plantains and other 'knick-knacks' and start to sell just about the same time," she told The Gleaner, while skilfully attending to a customer who stopped by to ask the price of her string beans.

"I could not cultivate enough for the market, so I buy different crops from other farmers," she continued, pointing out the small profit she made from the trade.

Pottinger disclosed that the most she is able to mark up on these products is about $40 on a pound of sweet potato, $30 on yellow yam, $20 on cucumber and cabbage.

"Sometimes if there is a lot in the market, I will get the goods cheaper and then I will be able to see something worthwhile. The plantain, and things like pepper, I am able to do better with because I plant them myself."

"I suffer badly, usually on a day when it is slow and I have to turn around and sell whatever I have left, after five o'clock on a Saturday, very cheap," Jody Ann Pottinger admitted.

Observing Pottinger in action, the impression is created that she is quite good at what she does. She would advertised her products by word of mouth to passing shoppers, a strategy that does not pay off some of the times, judging from the responses of passers-by.

"You see how hard it is selling in this market," she said with a worried look on her face, after enduring a long period of not making a sale.

"I have to buy yellow yam for $70 per pound from the farmers in the field, and I can only sell it for $100 a pound in this market because of all the other vendors selling the same items. When you take out transportation [costs], I am left with hardly anything."

Pottinger said that in her five years of vending, she has sold produce in the Coronation and St Ann's Bay markets, and nowhere has she seen the level of cut-throat behaviour like in the Spanish Town Market.

Without disclosing her earnings from the business after four days of selling, for what she stated were security reasons, she said that despite this situation she will always go home with enough to continue her trade and assist with the children's well-being.