Patrick Powell asks judge to have mercy, denies refusing to hand over gun 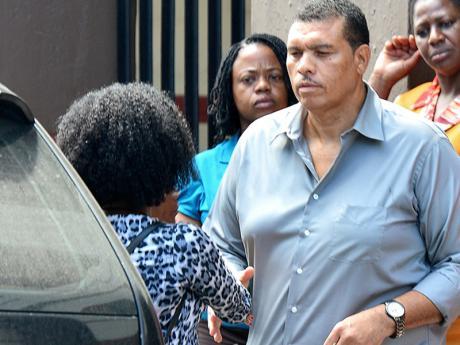 Businessman Patrick Powell this morning denied that he refused to hand over his licensed Glock pistol to police investigators in 2011 and asked the judge presiding over his trial for alleged breaches of the Firearms Act to have mercy on him.

Powell's first public comments about the case came as he gave an unsworn statement in the Kingston and St Andrew Parish Court.

He is on trial for allegedly failing to turn over his licensed firearm to police investigators who were probing the shooting death of Kingston College student Khajeel Mais in July 2011.

The teenager's father was in court as Powell insisted, three times, that he never refused a request by Superintendent Clive Walker to turn over his weapon.

He told the court that he was in the custody of the police who were investigating him for a murder when Superintendent Clive Walker asked him for a gun.

The businessman said he told Walker he did not want to speak to him without his attorney present.

"Knowing that this matter was under investigation I exercised my constitutional right to remain silent," he testified.

"All I did was to insist that whenever I was being questioned by the police that my lawyer was present," he explained.

Powell told the court that he was overseas when he was informed by  family members that he was the main suspect Mais' death and that a police raid was in progress at his upper St Andrew home.

He said he agreed to return to Jamaica and was taken into custody on his arrival at the Norman Manley International Airport in Kingston.

Before ending his statement, Powell told Parish Judge Vaughn Smith "this is your courtroom."

"You are God in here, may you have mercy," he said before taking his seat in the prisoner dock.

Soon after, the defence closed it's case.
‎
It had earlier called Detective Inspector Frank Buchanan and Deputy Superintendent Bertland Cameron, as witnesses.

Prosecutors and defence attorneys are to make their final submissions on June 28.