Diary of the ghetto priest | Jamaica was a kinder place! What has happened? 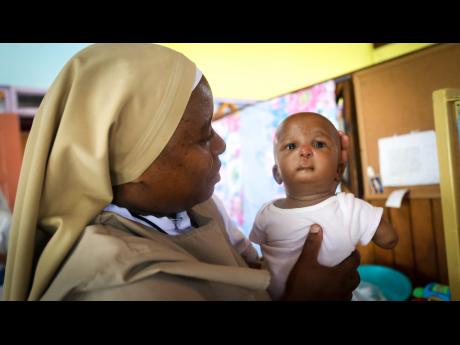 Contributed
A Missionaries of the Poor sister holding a baby from Holy Innocence Home. 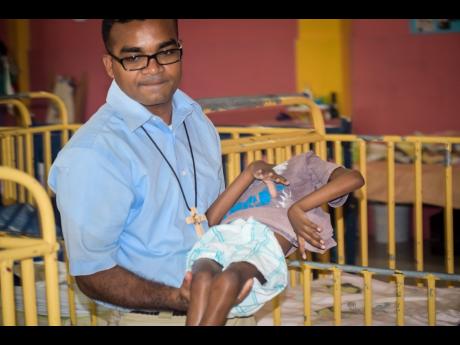 Contributed
Brother Sanjib of Missionaries of the Poor takes a disabled child to her crib.
1
2

"Father, why has the world gone so bad? I don't understand it. Jamaica was a kinder place, just a few years ago. Sometimes I have to counsel the brothers. They see, each day, a growing need to serve more and more homeless and destitute, and a fast disappearing culture of kindness and Christian values." Brother Alphonzo continued, "Are the homeless and destitute just an object? Are we not made in the image and likeness of God? I just had a bitter experience of a little girl, so sweet, so smiling, who has literally been thrown away by her mother - like nothing. Do you have a moment to listen, Father?"

There is a retarded child off at Bethlehem Home in 2009. Brother told the tale of the little girl at Bethlehem Home. Her name is Kimberly Coley. At the time she was admitted, she was nine years old. She was left at our gate. Later on, we found out the mother's name was Claudette.

The brothers took her in and cared for her for seven years. Then we transferred her to Nazareth Home where the Missionaries of the Poor run three homes, one for pregnant mothers who were considering abortion ( Holy Innocence); one for elderly, homeless and destitute women (St Elizabeth); and finally, a children's home for the abandoned, mentally and physically disabled children. The sisters have a convent adjoining these three homes at 13-15 Heroes Circle.

Kimberly Coley is the first child to be transferred from the brother's Bethlehem Home to Nazareth Home. Kimberly was born retarded, mentally and physically. It was hard to lift her because she suffered from cerebral palsy, both hands and legs were twisted and stiff. Kimberly could not utter a word that could be comprehended. She would give a smile when the brothers touched her or fed her, or when visitors came and changed her or made cheerful gestures. Then she would light up with a beautiful smile. Then Kimberly felt there was meaning to life. There was joy in the world, there was love!

At such times, the principle of Christ would warm the hearts of the brothers and sisters. "When I was hungry, you feed me; when I was thirsty you gave me to drink, when I was naked, you clothed me, when I was sick and homeless you took me in." Welcome into my kingdom!

The distorted body was taken to a funeral home

Brother Alphonzo continued to question, "But Father, how can a mother forget the child of her womb?" Just two months ago, Kimberly died. The sisters informed Claudette, the mother. The mother replied, "I don't have anything to contribute for the funeral. You must do what you can."

Sister Rose explained to Claudette, "It is your child. It is your responsibility. You did not care for her while she was alive. And now, you don't care for Kimberly at her death."

"What kind of heart does Claudette have? Is she human?" That is a good question to ask. I could only reply to Brother Alphonzo, "Pray for her." She did not come to the funeral service nor the burial held by the brothers.

"What astonished me too, Father, is this," he continued his tale about the cruelty in man's heart. "The Missionaries of the Poor sisters brought the little distorted body of Kimberly to a funeral home. It was left there for nearly two months. The sisters did not know there was need for them to keep pushing for the burial."

The sisters explained they did not have that money; Also, they had taken care of the coffin, the clothes, the funeral and the burial service. Finally, a kindly man, Mr John Cornwall, came forward and said he would find a way, and paid that bill.

"After all," I said to Brother Alphonzo, "There was that kind man! Let us give thanks to God for his kindness. There are still kind hearts in Jamaica."

On behalf of our brothers and sisters we say thanks be to God!