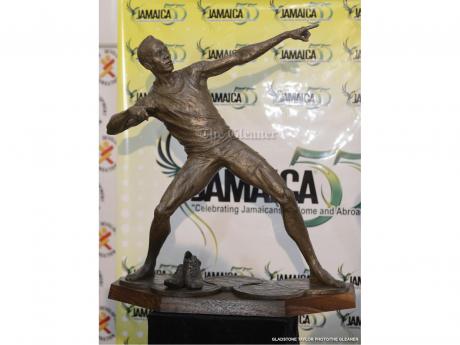 The maquette of Usain Bolt by sculpture Basil Watson that was unveiled today. – Gladstone Taylor Photo

The Culture Minister Olivia Grange has unveiled the maquette or a small preliminary model of the Usain Bolt statue.

According to Grange, the life-size statue of Bolt will be ready to be erected in August of this year.

Grange revealed the preliminary model by sculptor Basil Watson at a press conference this morning as she sought to dispel as “fake news” images of another statute that was being circulated on social media.

“There is no way that Basil Watson – who has sculptured Herb McKinley – would have sculptured the statue that has been circulating on social media causing public concern. That is just fake news," Grange said.

She also said all stakeholders are being consulted as the creation of the life-size statue progresses.

Bolt’s statute along with one of track and field star Shelly-Ann Fraser-Pryce will be placed at the National Stadium Park along Statue Road.

A second statue of Bolt has been commissioned by the Port Authority of Jamaica.