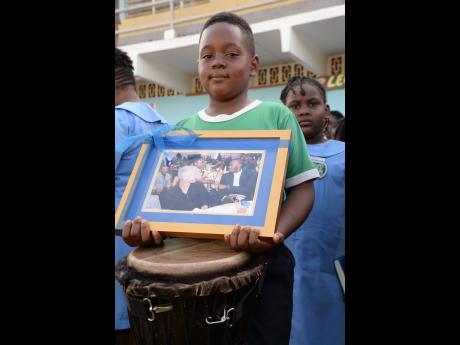 Jermaine Barnaby
Justin Reid is holding an autographed photo of himself and Usian Bolt, which was presented to him by Christopher Barnes, managing director of The Gleaner, on Wednesday. 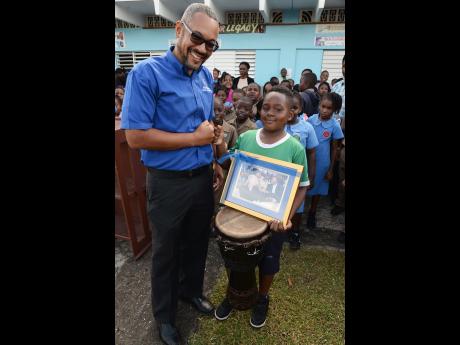 Jermaine Barnaby
Justin Reid is holding an autographed photo of himself and Usian Bolt, which was presented to him by Christopher Barnes, managing director of The Gleaner, on Wednesday as he shares a fist bump with Barnes.
1
2

Justin Reid, a grade four student at Ardenne Preparatory and Extension School, received the surprise of his life on Wednesday when The Gleaner presented him with an autographed photo depicting him exchanging a fist bump with sprint legend Usain Bolt at the company's honour awards earlier this year.

The presentation was made by The Gleaner's managing director Christopher Barnes during the year group's general assembly on Wednesday morning.

Justin was a part of the Lightning Drummers group that performed at the honour awards. Of meeting Bolt, he said, "When I saw him in the audience, I knew this was the moment that I had to use to thank him and encourage him to keep doing great things for all Jamaicans."

Barnes, in making the presentation, used the concept of 'the elevator pitch' to encourage the students to step forward, like Justin, and seize each opportunity as they arise. The elevator pitch, he explained, is to be able to concisely share their dreams with someone in an elevator before that person reaches his or her floor. He encouraged students to be prepared to share their dreams even with strangers as, "Who knows? That stranger in the elevator could one day help you achieve your goals".

Justin's mother, Monique Morgan, and grandmother, Marcy Vincent-Peat, were on hand to witness the surprise. They shared that music had made an indomitable mark on his life from a tender age, as his father is a musical engineer and producer. His mother expressed delight at this gift. "Justin has always sought ways to incorporate the Bolt pose in his performances out of respect and admiration for Usain Bolt. He also does this to reflect the name of the group, Lightning Drummers. I still remember the evening he came home from The Gleaner's Honour Awards and told me that he finally got a chance to meet Bolt."

Principal of the Ardenne Preparatory and Extension School, the Reverend Myrtle Clarke, and the conceptualiser and director of Lightning Drummers, Karen Davis, were delighted and welcomed the special presentation of the Usain Bolt autographed photo to Justin Reid.

Davis pointed out that Justin is now one of the lead drummers after becoming a member five years ago. His growth as a drummer can be seen as he participated in the 2016 World Championships of the Performing Arts in California, USA. The group emerged with 47 medals, four plaques and the top trophy for the category - junior instrumentalist.

The presentation followed the charge by The Gleaner's managing director at the honour awards in February that corporate Jamaica continues to find as many ways as possible to inspire the next generation despite the negative influences that abound. It was a company vision to create something special for Justin and his school family, and Usain Bolt and his team were happy to facilitate.

Usain Bolt recently completed his final 100m on Jamaican soil on June 19 at the National Stadium. Clarke told The Gleaner "This is something that I never expected to come out of the booking to play for The Gleaner's function, and this is exciting for all of us and it is remarkable that Usain would even take the time to sign this photo. This says a lot about the man behind the superstar and legend as we have deemed him."