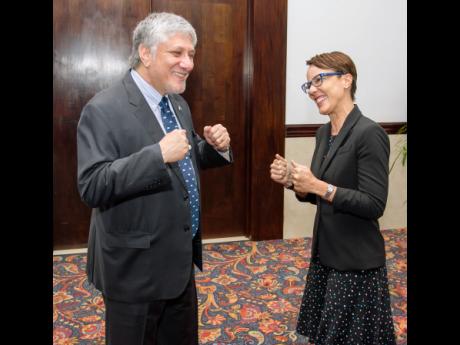 Darien Robertson
United States Ambassador to Jamaica Luis Moreno is about to bump fists with Minister of Foreign Affairs and Foreign Trade Kamina Johnson Smith, at his farewell function earlier in the week.

At the end of June, the tenure of United States Ambassador to Jamaica Luis Moreno will come to an end, this after having spent four years in the post.

At a farewell ceremony hosted by Moreno at The Jamaica Pegasus hotel in New Kingston on Tuesday, the ambassador said that the decision to leave Jamaica was entirely his, emphasising he wanted a peaceful and contented transition whenever the time came.

"I wanted to leave when I wanted to leave. [That date was] June 30," he told scores of government officials, diplomats and foreign ambassadors who attended the function.

Moreno, a career diplomat assigned to Jamaica in November of 2014, said that the job was difficult and tedious but hailed his team at the United States Embassy for their professionalism and support during his stint as chief of the embassy.

He also thanked the Jamaican Government and people for "accepting me with open arms".

The visit of President Barack Obama in 2015 seemed to be at the top of the list of achievements, but he noted that there was an extended long list of which he was proud.

The ambassador labelled the visit of Obama a tremendous success.

Asked Moreno: "How many guys can say they got President Obama to come here and visit?

"I have milked that puppy for everything its worth ... and until the day I leave, I will be milking that puppy," Moreno quipped.

The ambassador said he was also proud of meeting a goal of realising more than US$1 billion in investment in Jamaica during his tenure.

Some of that investment, the ambassador noted, was in the critical area of national security.

"We have helped made the Jamaica Defence Force the largest and most competent maritime interdiction force in the entire Caribbean. Our work against corruption has been a difficult battle but it was worth it and we are going to continue that ...," Moreno stated.

Most recently, Ambassador Moreno served as the Deputy Chief of Mission in Madrid, Spain. From 2010 to 2011, he served as the Political-Military Minister Counsellor and Force Strategic Engagement Cell Director in Baghdad, Iraq.