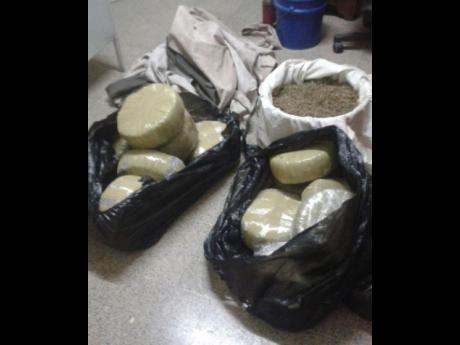 Gareth Davis Snr
A quantity of compressed ganja recovered by the Portland Police.

The Portland police are raising alarm that criminals have been invading the island's most peaceful parish.

The hierarchy of the Portland police say since the announcement of a reorganisation of resources and crime fighting strategies by Police Commissioner George Quallo last week, intelligence indicate that criminals have been relocating to the quiet eastern parish.

“Our intelligence have indicated that migrant criminals are seeking refuge here," said Deputy Superintendent of Police (DSP) O’Neil Thompson, in charge of operations for Portland.

Thompson pointed to the arrest yesterday of three men from Old Harbour, St Catherine after the police found a quantity of ganja during a search of the vehicle in which they were travelling.

“Yesterday we set up a series of road blocks across the parish and in one incident a car was searched and four and a half lbs of ganja was found," Thompson disclosed.

"Subsequent to that the police also recovered 73.5 lbs of compressed ganja in an abandon building at Woodstock in Buff Bay. A large portion of ganja seeds, along with a machine used to compress the weed was also found," he added.

According to the senior cop, the intelligence suggest that these criminals from outside the parish are linking with local fishermen who are suspected to be active players in the infamous drugs-for-gun trade between Jamaica and Haiti.

Against that background Thompson is calling on residents to be on the lookout for strange men and suspicious activities. He is cautioning residents not to harbour those seeking refuge, as their only intention is to disrupt the peace in the parish.

Portland has recorded two killings so far this year.