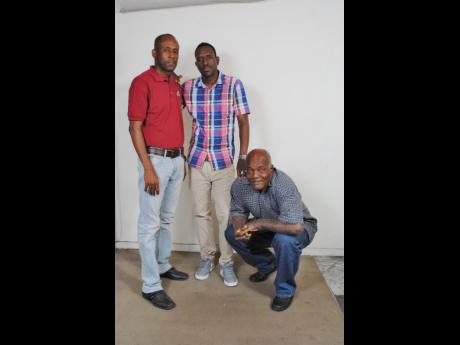 Forced into the role of being a single dad some 20 years ago when his children's mother left for a two-week trip overseas and decided not to return, Copeland Johnson quickly learned to cope with his two sons.

Now the two young men have nothing but praise for the man they call dad, while some friends and neighbours call him 'Babylon' or 'Carl'.

"She told him she was going away to shop for two weeks, on a trip that he had funded. When the time ran off and she didn't come back, he went over there to find out what had happened.

"Apparently, she was brainwashed by friends because she told him she wasn't coming back. She said 'Gwaan home to yu pickney dem'," the younger of his two sons, Craig, told The Sunday Gleaner of the story he has heard several times over the years.

Craig was just six years old at the time while his brother, Larry, was 10.

Having to take care of the two young boys alone was a hard task but not one Copeland could shy away from. Now 20 years later, they have nothing but praise for their father.

The brothers watched as their father juggled three jobs, a carpenter by day, a security guard at nights and a full-time helper to them.

Now they have him as their role model when they eventually become fathers.

"My mother's leaving really scarred me. I was hurt beyond belief. I couldn't understand why a mother would leave her babies behind, or what we could have done for her not to want us.

"But because of what I've seen and been through, I believe I was made a better man and will be even a better father to lucky children one day," said Larry.

"I think twice about the women I date right now, and though I know that a healthy and ideal family should include a mother and a father, I know whether the mom sticks around I am prepared to be the best man I can be for my little girl or boy," added Larry.

"He could have packed up and left too, but he stuck around and weathered the storm with us, and here we are today singing thanks. Because of him, I am, and because of him, I will be," said Craig in a sentiment echoed by Larry.