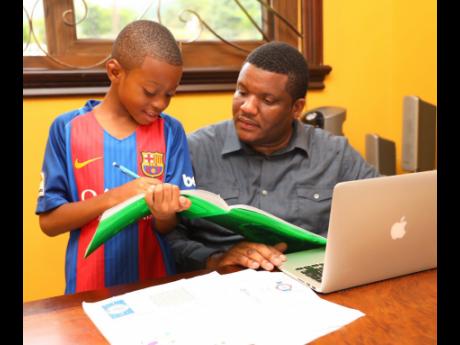 Like father, like son, one feeds off the welcome advice of the other. And so it goes for a generation of Cecil Smiths, who are not only passing on the tradition of a name, but invaluable lessons.

Faced with a decision to quit his job nearly 16 years ago, Smith Jr turned to his father for the answer.

When it came, he had no hesitation, sticking to the call of his most trusted voice - that of his father. After all, that was practically the only voice, with mom not around.

"To this day my father remains the most important male figure in my life. I almost make no decision without consulting him," said Smith, who is now the commercial director of J. Wray & Nephew Limited, having worked his way through the ranks until the appointment in 2015.

He was part of the team that positioned Appleton Estate and Wray & Nephew White Overproof Rum internationally, and led the successful development and execution of major national initiatives.

"I tried to leave this organisation once, and my father had a conversation with me when I got to that crossroads and said, 'listen, you're from a generation where everything is instant gratification, but you're in a stable organisation and the sky's the limit for you. Once you make the right decisions and do the right things to shape your own career everything else will come'," Smith Jr recalled.

"That conversation 16 years ago caused me to stay in the organisation and transition from one role to another with increasing responsibility. If I never had that relationship or conversation with my father, I probably would've made a different decision."

The tight bond of that father-and-son relationship led to the Wray & Nephew executive naming his son Cecil Smith III.

"It's more about an ode of respect to him. As a father, he showed me so much love and leadership that I could be able to live my life ... that's the reason for the continuation of the Cecil Smith.

"We had a very outstanding father-son friendship and I'm trying to establish that mutual respect between my son and I, that frankness and openness. I encourage him to talk to me about anything, regardless of how insignificant he thinks it might be, so that I can help to shape what he's learning," Smith Jr said.

At eight years, Cecil III is not too young to be ingrained in the Smith's way during their yearly Father's Day ritual.

"Father's Day is like Mother's Day, as my mother was not in the home for much of my formative years, so it was my father being father and mother. So both days are celebrated around my dad," said Smith Jr.

"It involves picking him (father) up from his home relatively early, take him to mine, we have our rituals where we sit down and chat - from sports to politics, family - we typically spend the entire day talking.

"Now that my son is here, he has a seat at the table and he's involved in the [conversations]. On that particular day, all three generations of us sit down and talk. Many of my life lessons have come from those conversations.

According to Smith Jr, a key lesson he learnt from his dad involved "being my own man".

To a large degree, that has shaped much of his decisions, which have come aplenty in his professional setting.