Historic study on the Diaspora under way 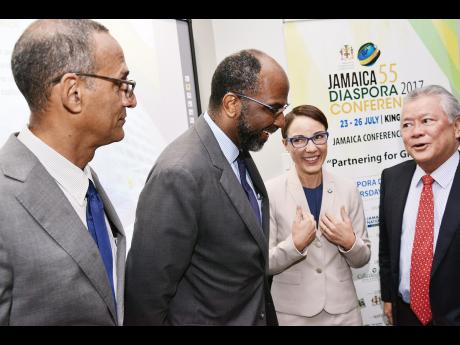 For the first time, the government of Jamaica is to receive access to empirical data on the contribution of the Diaspora to the country's development.

This was revealed during a Breakfast Conversation where a new study being undertaken by the Caribbean Policy Research Institute (CaPRI) was announced on Friday. The study will look at the value of the Jamaican Diaspora.

In giving an overview of the study, CaPRI Executive Director Dr Damien King indicated that, in the interest of economic growth, Diaspora engagement is very critical going forward.

King noted that two significant areas will be addressed, including accurately estimating what is the current value of economic activity and looking at the potential growth and areas that can be expanded.

"We are seeking to look at accounts in financial institutions, we are going to engage the Companies Office (of Jamaica) which we have started to do already, to get a sense of businesses located in Jamaica, that are owned by Jamaicans living abroad. We have started talking to the (Jamaica) Stock Exchange to see if we can get a value of shares that's going to give us a sense of the current situation.

He noted also that while data exists on exports in Jamaica, there is still need to drill down on specific items in order to get a sense of export value coming from the diaspora.

Minister of Foreign Affairs and Foreign Trade, Kamina Johnson Smith commended CaPRI and the Jamaica Diaspora Institute (JDI) for the joint undertaking of a study that "represents a game-changer in how we trade with the Diaspora".

The minister, who has responsibility for the Diaspora, said the study will help to fill the gaps as it relates to the involvement of the Diaspora in national development.

She further stressed the importance for the government to develop policies with elements that will benefit all Jamaicans making up the Diaspora as they are representative of various levels of social and economic diversity.

Smith expressed gratitude for the Diaspora on behalf of the government, noting what she described as significant contributions made to various sectors including health and education, whether through donations, time, skills or expertise.

"Diaspora donations to the health sector for the period January to May 2017 have amounted to three million and these will help support our efforts to create a healthy and stable population while increasing, of course, the productivity of our workforce," she said.