Ian Kerr is Hotelier of the Year 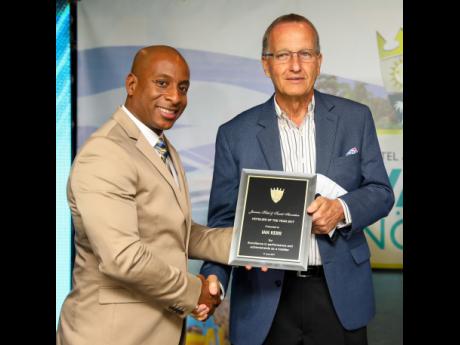 Contributed
Ian Kerr (right), managing director of Sunset at the Palms, Negril, accepts his award from JHTA President Omar Robinson during the annual general meeting of the association at The Jamaica Pegasus hotel in New Kingston. 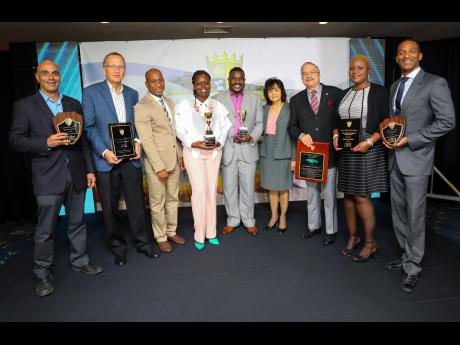 Ian Kerr, managing director of Sunset at the Palms, is the Jamaica Hotel and Tourist Association's (JHTA) Hotelier of the Year for 2017.

Kerr was recognised for his sterling contribution to the development and enrichment of a quality Jamaican tourism product by his peers during the 56th annual general meeting of the JHTA at The Jamaica Pegasus hotel last Saturday in New Kingston.

Kerr operated the popular Sunset Jamaica Grande for several years before selling it to the Moon Palace resort group. He also made Sunset Resort and Spa (now Sunscape) famous before handing over the management of the property to AMResorts.

"Applying the high standards by which hoteliers are judged, he is rated as 'outstanding' in every category, including operations, food and beverage, marketing, staff training and motivation as well as innovation and creativity and, of course, building & grounds," said the JHTA in its tribute.

The respected hotelier shared the spotlight with multitalented entrepreneur of Pier One on the Waterfront and Reggae Sumfest fame, Robert Russell, who received the 2017 Abe Issa Award, and Ralph Smith, founder of Tropical Tours, who copped the coveted Lifetime Achievement Award.

All three recipients are based in the tourism capital, Montego Bay, and have made indelible contributions to the sector.

"It is for his uniquely rich and varied contribution to Jamaica's success in tourism and entertainment for over 40 years, for his strong leadership in highlighting the country's cultural heritage and for consistent work to enhance its image as a tourist destination, that the JHTA is pleased to present Robert Russell with this award," said the tourism organisation.

In the case of Ralph Smith, a pioneer in the modern ground transportation system in Jamaica, the JHTA said he has consistently demonstrated a clear understanding of the inseparable link between tourism development and community development.

"His philosophy is captured in the words of the old song, 'There's no me without you'."

The awards, which have become an integral part of the JHTA luncheon, also saw Appleton Estate Rum Tour's Tiffany O'Meally walking away as Tourism Employee of the Year prize, and bartender at The Courtleigh Hotel and Suites, Anthony Bascoe, copping Hotel Employee of the Year.