JDF member held at airport in connection with cocaine find 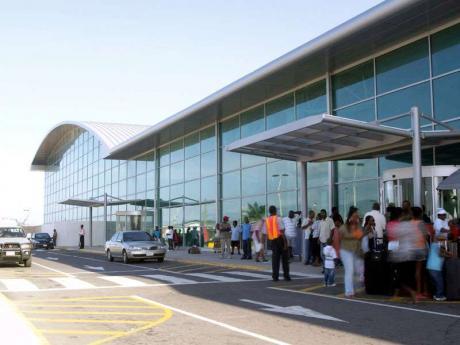 Travellers gather outside the departure section of the Norman Manley International Airport in Kingston. – File Photo

Narcotics police have arrested a member of the Jamaica Defence Force (JDF) who allegedly tried to leave the island with 2.8 kilogrammes of cocaine valued at $3.3 million.
The identity of the 32-year-old soldier is being withheld.

Investigators say he will be interviewed in the presence of his attorney then charged with possession of, dealing in and taking steps to export cocaine.

He is also booked to appear in court on Wednesday.

Law enforcement sources say the soldier turned up at the Norman Manley International Airport in Kingston shortly before 5 o'clock yesterday to board a flight destined for Canada when canine personnel alerted detectives to a suitcase.

The suitcase, which was retrieved and traced to the soldier, was later examined in the presence the soldier.

The suitcase was found to contain false compartments with a white powdery substance resembling cocaine.

The soldier, along with the contents of the suitcase, were reportedly taken to the Narcotics Police Division at the airport where detectives conducted more detailed examination.

According to law enforcement sources, three souvenier cups with more white powdery substance resembling cocaine were found in each cup.