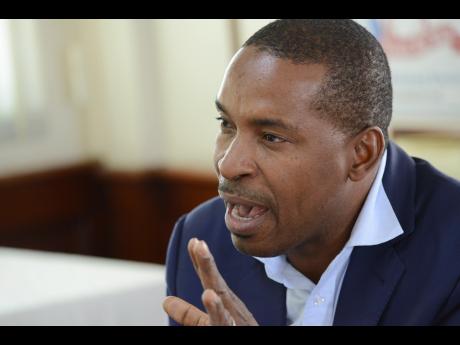 Dr Carl Bruce, medical chief of staff at the UHWI, says the hospital, which was founded in 1953 as a teaching laboratory for the students of the UWI, will be made more technologically and environmentally friendly.

"We would like to construct training centres that can hold up to 50 people at a time, "so while the hospital will be more modern, there will be modern teaching also," he said.

Bruce is optimistic about the developments and believes they will help in providing better training for the students.

"With a modern infrastructure system, digital cameras will be installed in the centre of the operating rooms and all the students can see without trying to climb on a stool.

"Also, lecture rooms will be built in the new unit, so they can do their lectures in there, view the operations and interact with lecturers and consulting surgeons," he expressed.

Bruce was among the panelists from the UHWI addressing plans to develop the hospital at a Gleaner Editors' Forum.

... Hospital advancements based on need

University Hospital of the West Indies (UHWI) Chief of Staff, Dr Carl Bruce, has indicated that the developments currently underway at the facility are taking place in light of the need for a more modern and efficient hospital.

"We are introducing a more minimal invasive interventional department, where, instead of doing open surgeries, we use other improved methods of health care. So if there is liquid settling in the body, we can drain it without cutting the patient open," he explained.

"Remember in the old days, you used to hold up an X-ray into the light and have a look? We want this and other documents to be available on computers."

He said these improvements will pave the way for new professions.

"Rather than being a general surgeon, you will become a minimal-invasion surgeon or minimal-invasive empathic surgeon for liver, so there will be new professions and specialities that one can pursue," he noted.

"It's a very exciting development, especially for those who are graduating and coming through the system now. It's the computer age. The technology is creating new professions and new ways of treating patients."

Bruce said this would not pose a threat to doctors trained before the technological developments at the UHWI.

"Even though we are going to go up to 30 per cent minimal-invasive surgery, we still need to have open surgeons as there are motor vehicle accidents and traumas and open wounds and fractures that we still have to take care of."