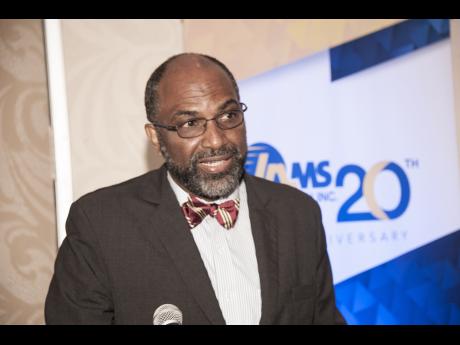 Earl Jarrett, chief executive officer of the Jamaica National Group, has called on members of the Jamaican diaspora in the United States of America (USA) to increase their lobbying efforts to change a detrimental new remittance tax proposal

In April, The Border Wall Funding Act (2017) was introduced in the US Congress, which proposes to impose a two per cent tax on remittance transfers from the USA to certain foreign countries to "improve border security". The bill named 42 foreign countries, including Jamaica, and almost all countries in the Caribbean.

"There is no reason for Jamaica to be drawn into paying such a tax, given the implications it will have for us," Jarrett declared. "Therefore, as a community, we need to lend our voices to the lobby efforts to ensure that the bill assumes a greater sense of practical reality in its final stage."

Jarrett was addressing members of the Jamaican community in Florida who attended the JN Money Service USA Inc dinner in Plantation, Florida, on May 27. The remittance company, a subsidiary of the Jamaica National Group, was celebrating 20 years of service in that state.

Horace Hines, acting general manager of JN Money Services, explained that the proposed tax on remittances would have unintended consequences and make it more expensive to remit funds to Jamaica from the USA.

"A tax on remittances will increase the cost to send remittances, which may trigger a reduction in the amount of funds each person sends home," stated Hines.

He also noted that "the World Bank, which has been lobbying for a reduction in the cost to send remittances over the years, has indicated that countries imposing tax on remittances eventually remove it, because there is marginal benefit in terms of sums collected. In addition, the tax drives some persons to use informal channels."

In March, World Bank economists Dilip Ratha, Supriyo De and Kirsten Schuettler stated that a tax on remittances would amount to double taxation on the poor and would increase hardships. They opined that the poor would be taxed when they earn their income, and incur further taxation when they remit that income to relatives overseas.

They also pointed out that if a tax is implemented, areas such as investment and philanthropy at the small and micro levels would be severely affected, because remittance channels are used for small-value transfers.

Horace Hines, acting general manager of JN Money Services, declared that his company would be monitoring the situation, while preparing to lend support to lobbying efforts to ensure that Jamaican interests are protected.

The World Bank also stated that remittances impact development and welfare. It is an important source of foreign exchange, while providing balance of payments support. Receivers of remittances use the funds to pay utility bills, purchase food, secure medication, facilitate the education of children and pay rent. Others save, invest, or operate small businesses.