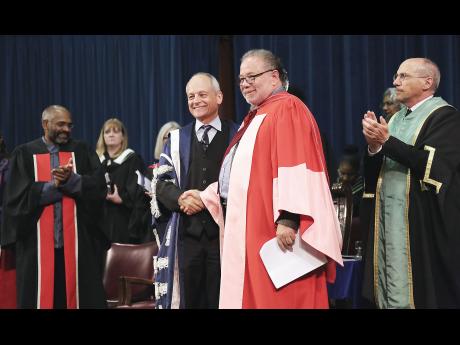 Two days after his older brother Stephen Hill was honored in New York, United States by a local media business organisation for his contribution to media, younger brother Robert received an honorary degree from the University of Toronto in Canada at their 2017 spring commencement for his works on Jamaica's national hero and civil rights activist Marcus Garvey. Degrees were conferred on Robert Hill along with approximately 400 others.

The Hill brothers, Stephen and Robert, are students of an early Jamaican school system. Both took opportunities available outside of Jamaica after their secondary education. Through their values reinforced by their humble beginnings, their learning ability in Jamaica gave them the capability to achieve success in their respective fields.

Robert (Bobby), a professor emeritus at UCLA, now living in California, is considered one of the world's leading authority of 'Black Memory'. Black memory covers all aspects of African culture. In fact, he was dubbed the 'storyteller of Black history' by one of his colleague. Pick any black person and Bobby will relate their history with passion.

As an authority on global influence and an intellectual on Pan-Africanism of the 20th century, Bobby took to the teachings of Marcus Garvey as a youngster and studied Garvey's UNIA movement. Through his writings and arguments, Bobby has published 14 volumes on the mass movement of Garvey.

Bobby, who received his doctorate in Laws Honoris Causa (honour without requirements) from the University of Toronto, explained what it's like to have a childhood desire and work for it. He explained the importance of coming back to the university for a second time.

"Fifty years ago I was alone," he echoed, noting what it now meant to have his family and friends join him.

Stephen, a visionary who lives in Jamaica, saw what was missing among Caribbean nationals in the New York area. He transformed his business thinking into a media operation 22 years ago. The chief executive officer of CINTV in New York City, he uses the television platform to deliver information from across the Caribbean islands to NYC and part of the tri-state area.

Last week, Stephen received the Trailblazer Award at the Business Innovators & Game Changers award ceremony from Where Itz at magazine for his Caribbean media contribution in the NYC area. Stephen, in accepting the award, expounded on the importance and support of ethnic minorities in business by Caribbean nationals.