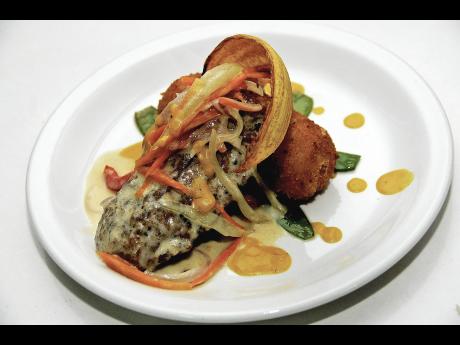 Winston Sill
This scrumptious pimento-crusted seared snapper dish is always a favourite at Tracks and Records.

The Usain Bolt's Tracks and Records in Pineapple, Ocho Rios, St Ann, will be the scene of a lavish Ocho Rios Seafood Festival press launch tomorrow.

"We are very happy to be hosting the official media launch for the Ocho Rios Seafood Festival," said Marsha Jhamnani, owner of the Ocho Rios franchise of the popular restaurant chain.

"The festival has a very rich history and fits into the kind of family-oriented plans we have here for this franchise."

She added that "we are proud" to partner with one of the designated Jamaica 55 events and see this as an added boost to the entertainment offerings in the resort town of Ocho Rios.

Camille Miller, director of communications for the Ocho Rios Seafood Festival, revealed that both the Jamaica Tourist Board and the Ministry of Culture, Gender, Entertainment and Sport are on as major sponsors, and that "we will be the grand gala of the north coast on Emancipation Day, Tuesday, August 1".

"The Ocho Rios Seafood Festival is arguably one of the biggest culinary shows in Jamaica today. Having sponsors of the calibre of the two government ministries is not only a major boost, but can be viewed in the context that we are ready to take this event to another level," Miller noted.

"In 2007, the first year of the festival, over 15,000 persons were in attendance; while in 2008, in spite of heavy rains, we managed to draw a crowd of over 10,000. The preceding years have been no different as we again have been consistently having good turnouts. We are strongly of the view that the Ocho Rios Seafood Festival has the potential to be one of the culinary events that can make a huge difference."