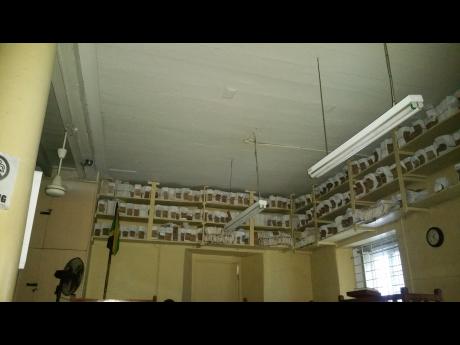 Tamara Bailey
A courtroom where documents are stored on shelves. 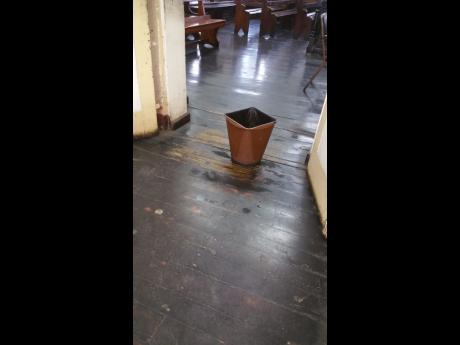 Tamara Bailey
A container is placed at the entrance to the main courtroom at the Manchester Parish Court to collect water from the leaking roof.
1
2

Whether it's the leaky roof, past bouts of rat infestation, windows falling out or female lawyers tripping after having their heels stuck in holes in the wooden floor, the problems at the Manchester Parish Court are numerous and workers and visitors have had enough.

Chief among many persons' concerns is the matter of the dilapidated building that leaks ever so often.

"There is a particular area on the staircase that leaks so badly, you will be soaked trying to pass that area when it rains heavily. Persons have been known to fall there a few times. Can you imagine when it's wet?" a court worker, who asked not to be named, told The Gleaner.

"The leaking was the worst I have ever seen it during the sitting of circuit, which was around the time of the heavy rains recently. The offices leaked and while the courtroom did not leak, who knows what may happen a couple weeks from now? Today it did not rain as heavily and the building is leaking. With hurricane-force winds along with the rain, I don't know what can happen," the worker shared last week as it rained in the parish.

Another court worker admitted that from time to time, documents get wet and are placed near to windows to be dried by sunlight, then returned to storage.

"Different ministers have come here. The chief justice herself has been here and they have said they have identified places for relocation. At one point it was Spur Tree, then another area near Mandeville Hotel, but those fell through. Now I hear it's another location on Manchester Road."

According to the worker, a piece of concrete fell from the building late last year, causing the police to cordon off the area.

"It seems as though something drastic has to happen before something is done. Maybe the building has to collapse first. The building is literally falling apart. When persons are in the courtroom downstairs and people are walking upstairs, the persons downstairs have to actually move around so that the dust falling from the roof won't affect them."

He continued: "Downstairs, the documents are stored on shelves accessible to anybody who comes in the courtroom. The metal detectors at the entrance aren't even working and sometimes when you have four judges here, with only three courtrooms, an office upstairs has to be used as the courtroom. This has to be the worst of the worst."

The worker said that the main bathroom for staff is used by both males and females and is located immediately next to the lunchroom.

"The whole building is falling apart, windows have fallen on me. Windows have even fallen out on jurors. The metal railing at the entrance to the court is shaking and everyone, who at some point in time has stepped in here, has expressed their frustration and disgust."