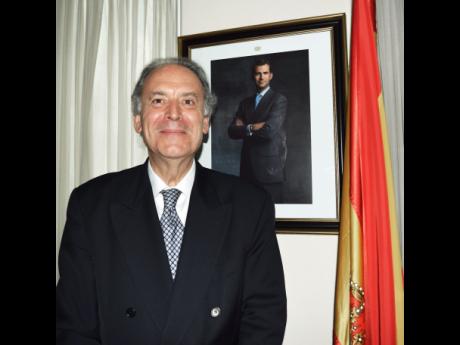 Spanish State Secretary for International Cooperation and Latin America, Fernando GarcÌa Casas, is scheduled to pay an official three-day visit to Jamaica, where he is expected to hold talks with senior government officials.

Casas is expected to arrive at the Sangster International on July 9. He is also set to meet several Spanish business operators while in Montego Bay before travelling to Kingston for discussions. He leaves from Kingston on July 11, the Spanish Embassy told The Gleaner.

"The new ambassador has arrived with strong instructions from the government of Spain to continue fostering the excellent relations that currently exist between Jamaica and Spain. As proof of this commitment, just one month after his appointment, this high-level visit has been arranged with the expectation that more similar visits will follow, the Embassy's Deputy Head of Mission, Carmen Rives, said.

She said that the agenda is still being drafted, with priority to be given to Spanish business persons and senior officials of Government.

Casas is expected to hold talks on the level of Spanish investment in Jamaica including the expansion of the investments, in the tourism sector and other related fields such as energy, public works and infrastructure.

"Other areas of discussion will be the promotion of Spanish language and our cultural agenda in Jamaica. And, of course, the international agenda will be addressed, re common challenges such as climate change, international security and human rights," Rives explained.

The visit, she said, shows that Spain continues to see Jamaica as a key bilateral partner.

"We have historical, cultural and economic links with Latin America and the Caribbean. Jamaica is one of the major players in the region and, being the geographic centre of the region, it has a strategic position of which we are not unaware," Rives said.

Ambassador Bessa also that it was his wish that the Spanish language is adopted as a second language in Jamaica to help cement bilateral ties between both countries.