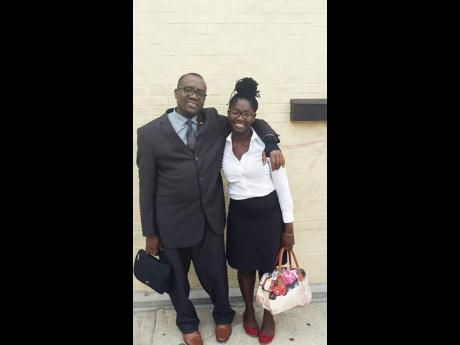 Simone Townsend describes her father, Ukel, as extraordinary, partly owing to the fact that though times were tough, he managed to single-handedly cater to all her needs and those of his other three children.

"When my parents separated around nine years ago, my father decided that he was going to take us two girls, barely teenagers, and my younger brother. We struggled financially and emotionally. He wasn't and still isn't much of an emotional man, but what he lacked in that arena, he tried his hardest to make up financially, and even though he only worked minimum wage, being a security guard, he didn't let the low income phase him. He begged and borrowed," she said, adding that they never missed a day of school.

Townsend told Family & Religion that her father later travelled to St Catherine to look for his other son, who they didn't know at the time, and brought him back to live with them in St Thomas.

"So that's four kids - three high-schoolers and one in primary school," she said.

Also qualifying her dad as extraordinary was an incident Townsend recalled that happened years ago.

According to her: "When (Dad) was in Cayman, my sister, who was going to Andrews High School for Girls at the time, was stuck downtown. I don't remember why, but she called Daddy and he had to figure out a way to get her home - (all the way) from Cayman!"

A few years of struggle and perseverance later, Townsend is now at the University of the West Indies (UWI) pursuing a law degree; her sister is in France doing a combined undergrad and master's programme; her younger brother is in high school, and the older one is employed.

"My sister is in France because of his efforts, and partially because of a scholarship, though he was initially reluctant to allow her to go. He is the one who finances her boarding and food.

"Also, he is the one who is supporting me through law school. I'm currently attending UWI, tuition-free because of his motivation. He believed in me and is always encouraging us, telling us we can do anything," said the second-year law student.

Townsend's father proves not only to be a devoted, supportive, and industrious family man, but also one of strong faith in God.

His younger son is currently in the hospital with scoliosis and scheduled for surgery on the weekend, but according to his 21-year-old daughter: "He's not worried. He was, at first, when we were trying to rack up the cash for the surgery, but something came through, and now we don't have to pay for it, so he's settled. Plus, he's a man of faith. He did all he could to ensure that (my brother) has everything he needs, so now he is leaving the rest to God."