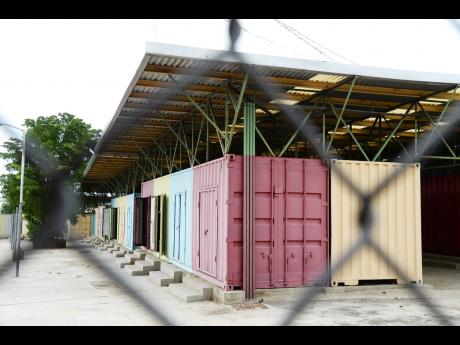 Jermaine Barnaby
Some of the 54 brightly coloured container shops which are not being used four years after they were set up in downtown Kingston. 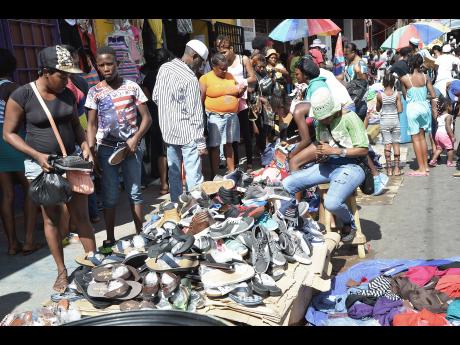 File
Haberdashery vendors sell their goods on Orange Street in downtown Kingston while the containers built for them some four years ago remain empty.
1
2

More than four years after vendors were ordered to vacate the Chapel Lane market in downtown Kingston, and millions of dollars was spent to equip the area with 54 brightly coloured container shops, the authorities are still struggling to decide on a suitable use for the facility.

The vendors were given notice in 2012 to relocate, and most have since tried to make do along the roadway in front of the market. The refurbishing of the market was part of a $42-million downtown Kingston Renovation Programme which was funded with a grant from the PetroCaribe Development Fund.

The project was completed by the Urban Development Commission (UDC) in 2014, and was handed over to the Kingston and St Andrew Corporation (KSAC), but the council is yet to decide on the way forward.

"No decision has been made yet as to where we go with those. I can't action until I get a policy position from the mayor," explained Gary Robotham, commercial services manager at KSAC.

"Initially, they were built for vendors. They were supposed to be for the haberdashery vendors because there is a greater need in the market district for the expansion of our capacity for haberdashery vendors; the people who sell clothes and shoes and that type of thing," said Robotham.

When The Sunday Gleaner visited the busy market district last Thursday, vendors voiced their objections to this idea, saying that the fee to occupy one of the containers would likely be too costly for them.

One clothes vendor said she was already struggling to pay the $300 she was being asked to pay three times for the week for selling along Chapel Lane.

"I don't know is what that them make up over there," she fumed.

"Them should have just fixed it (the market) up and mark it off and let everybody have them own section," another vendor opined.

UDC portfolio manager, Peter Risden, said the aim was to create a more orderly space for vendors and to improve the shopping experience for those who visit the market.

"The idea was to try to bring some structure and control to the area, by virtue of the fact that if you go up into the market district, it seems a little disorganise. So the intent was to create container shops.

"So you would take a 40-foot container and divide it into four pieces, so each person would get a 10-foot section, where they would have the liberty of either storing their goods or operating from the shop," he said.

Initially, UDC had contemplated various options for operations, including divestment; however, these ideas didn't get off the ground.

"That couldn't work, because KSAC, as the municipality, has the legal authority to operate markets," explained Robotham.

Container load of trouble - Warning: growing trend of using containers to house businesses could be dangerous