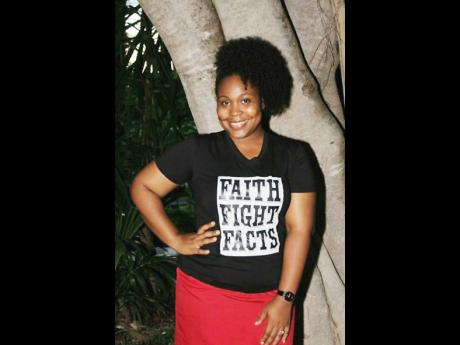 It was while doing the dishes one day at home that Shaniese Laylor-Bogle was convicted to use her experience as a child of God to help and encourage others.

"The thought came to me to minister through my testimonies, because too many people are hurting and they believe they are alone! Too many suicides taking place. Too much hurt. Too much pain, and people are channelling the pain wrongfully," she explained.

The 27-year-old woman of God told Family & Religion that's how her book came about.

Laylor-Bogle, a teacher of English, revealed that at first, she was nervous, afraid, and hesitant but decided to give in to what she believed was God's direction on her life, and without owning a laptop, she began to write.

"I used when I could (a laptop) from my school, and in less than a month, the manuscript was completed God is just awesome! When I didn't know how to structure certain scenes, the Lord just held my hand and we wrote what should be written to help the drowning man (and woman). He's truly the best Way Maker!" she exclaimed adding that the book is titled When TROUBLES Come ... Trust Me, They Will!

According to Laylor-Bogle, who has been baptised since she was six years old, "The book exposes that troubles must show up. Trials are not afraid of anybody's social status. No-one is exempt!"

"Trudy, who is the book's protagonist, was a young Christian who thought certain things would never happen to her. But after a while, especially after she got married, some high waves of trials threatened her emotional, social, spiritual, and physical well-being.

"The overall aim is to get people, especially youths, to realise that they should gear up for troublesome times so that when they come, they will know just what to do to preserve their sanity and integrity!"

Laylor-Bogle told Family & Religion, the Holy Ghost intervened in the writing process as it allowed the words to flow from deep in her heart without breaking her emotionally.

"I felt the tears and the fear to stop writing many days, but God gave me the courage to continue.

"I want to encourage Christians to stop pretending, (but) to share with others how they got over their trials as you might change or save a life," she said.

The book "When TROUBLES Come, Trust Me, They Will!" will be published locally on August 26 and will become available on Amazon in July.

Laylor-Bogle added that her t-shirt lin, called 'Ministry through T's' was also born out of the aim to encourage others to stay true to what they believe.

"The shirts have been doing well. People love the empowering quotes that they bear. Some might think it's only a brand, but it actually means ministering to people through T-shirts and testimonies. So we dress and testify with confidence!

"I intend to invite others to give the Devil a lot of 'Ouch' moments! That is, when he thinks he has us cornered, we should shock and surprise him by pulling out our weapons of faith and praise unto the Most High God. Let that devil know that we stand in the face of adversities because we are overcomers!" she declared.