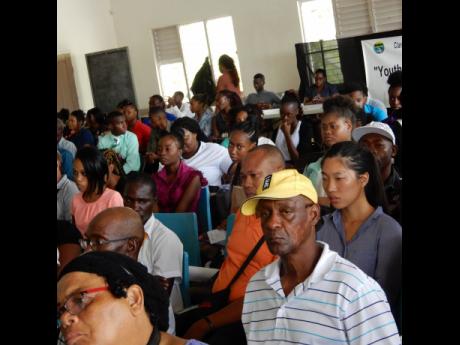 Cecelia Campbell-Livingston
Residents who turned out for a meeting on disaster preparedness in Clarendon recently.

It was a fiery town hall meeting on Monday evening at the St Gabriel's Church Hall in May Pen, Clarendon.

Staged under the theme 'Disaster Management and Preparedness - Who Is Responsible?' residents from various communities in the parish came out with a lot on their minds.

They cited problems with the drains and gullies not being cleaned. For others it was the members of parliament and counselors not paying attention to bad roads and other flood hazards in their communities.

However, citizens' responsibility was the central theme throughout the many presentations which started with a passionate speech from Custos of Clarendon William 'Billy' Shagoury.

The custos also pointed out that although natural disasters are inevitable, the onus is on everyone to take proactive action to deal with them.

Reminding residents on their vulnerable status regarding heavy rainfall, he stressed the importance of making preparedness a part of their everyday lives.

Some residents of Tollgate which was badly hit in recent heavy rains, spoke about their frustration in being overlooked when assistance was given by the government.

They also blamed the various stakeholders for not paying attention to the flood hazards in their community.

"Wi tiad a it, mi nah vote for either JLP (Jamaica Labour Party) or PNP (People's National Party) when election come around, because a ongle when election yuh si dem," one woman shouted.