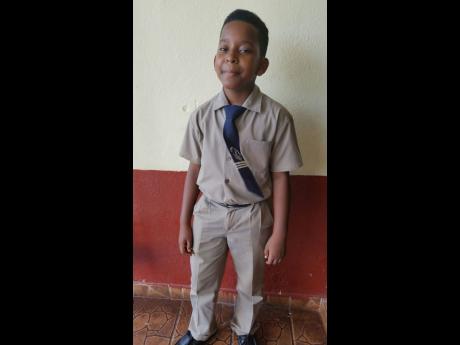 Grade Six Achievement Test (GSAT) top achievement stories are not just limited to success with high scores that are matched with placements at schools of choice.

Success is sometimes measured from the depths from which a student has to rise to reach the top, and the courage, determination and heart that go into achieving one's goal.

The 11-year-old student of Bethany Primary School in St D'Acre, near Alexandria in St Ann, has been through a lot over the past two years. With his family ripped apart by cancer, Kagel still managed to score well enough in his GSAT to be placed at his first choice, York Castle High School in Brown's Town, St Ann, with an average of 88.3 per cent.

Last year, while Kagel was preparing for GSAT, his mother died of cancer at just 42 years old. A few months later, his sister,15-year-old Asha-Marie, was diagnosed with leukaemia, a cancer of the blood or bone marrow. Fortunately for her and her family, the disease was diagnosed early and she was taken overseas for treatment.

But having spent his entire life sharing space with his mom, dad and sister, and to be faced now with emptiness where the two female figures are concerned, Kagel was unsure how to deal with it at first.

And GSAT was fast approaching.

"It was difficult for him," admitted his dad, Ashford. "One evening he came home from school and just sat there, with a far-away look in his eyes. I asked him what was wrong and he said, 'Daddy, everything.' I said to him: 'You're 11. You can't be carrying the world on your shoulder'."

The senior Henry was not prepared for the response that came next.

Kagel looked up at him and said: "Ah nuh seh mi nuh believe in God but look how much mi pray fi mommy and she neva mek it. She dead an' gone, an' now Asha in hospital. And mi have GSAT next week."

Henry admitted he did not know how to answer the question at first, but he prayed about it. He later tried to explain to his son that God doesn't work how we want Him to, but on His own accord.

GSAT was fast approaching and Kagel was under pressure. There was a noticeable change in his attitude as he would now get upset quite easily.

Also, he wasn't spending the time on his schoolwork that his father expected him to.

But on the days of the exam, Kagel went home with a pleased look on his face.

"Daddy, I did well," he told his father with a big smile.

Kagel was one of the top performers at Bethany Primary School and one of eight who passed to go to either York Castle or Knox College in Spalding.

At school, there was no noticeable change in Kagel's academic performance.

"The tragedy was not reflected in his grades, it was more so in his behaviour," pointed out school principal Orville Harris.

"He has been a tower of strength. Despite finding it difficult, he managed to overcome and get good grades. This is probably one of the best ways, in my entire career, that I've seen determination supersede adversity."