Fear the floods! - Poor planning and bad practices leave much of the country at risk 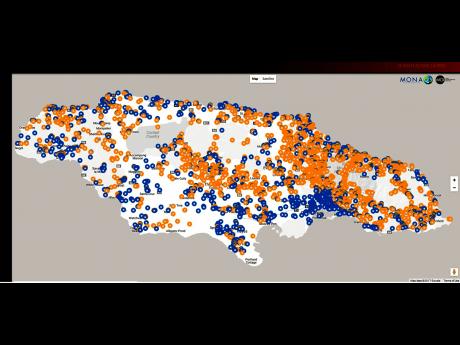 Contributed
Mona GeoInformatics' map of the danger areas, updated to May 2017, show areas of flooding and landslides in nearly all parishes. 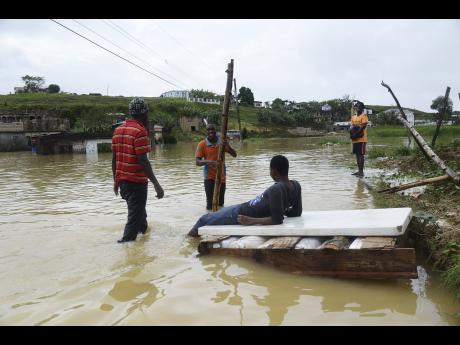 File
Residents in Douglas Castle, Clarendon use a makeshift raft to cross flood waters in the community.

Ian Allen
A resident points to a flooded area in Douglas Castle, Clarendon, following the heavy rains in May.
1
2
3

From Negril to Morant Point, scores of Jamaicans are living in flood-prone zones, and the actions of some persons are increasing the risks faced by many others.

"The domestic practices of some of our people are a danger to even their neighbour. The way some people operate and dispose of their garbage is just nasty. Get a squatter community doing that and those practices can turn another area into a flood zone," said Parris Lyew Ayee, head of the Mona GeoInformatics Institute of the University of the West Indies.

With Jamaica experiencing a moody weather pattern since the start of the year, several areas, including some not considered susceptible, have experienced flooding and Mona GeoInformatics' map of the danger areas, updated to May, show areas of flooding and landslides in nearly all parishes.

Lyew Ayee told The Sunday Gleaner that some parishes are in greater danger than others, with St Catherine among those where residents face the most risks.

"Before you build your house, for example, there was just a hillside. You end up putting in your driveway and the house at the end of the driveway. Your roof and your driveway then begin to channel water into the road. And because your roof is made of zinc or whatever, and your driveway of made of concrete, the water is moving very fast.

"As a result, it goes into the road with accelerated velocity. Now, just imagine all houses on hills doing that. And you see the body of water coming on to the roadway," said Lyew Ayee.

He noted that the accelerated velocity damages the roadways and introduces debris into the flow, which goes into the drains and block them.

According to Lyew Ayee, a sustained effort has to be placed on the country's drain-cleaning efforts as man-made problems, coupled with improper garbage disposal, have turned Jamaica into a nightmare for many.

Recently, residents along the southern part of Clarendon were victims of heavy rains which left some houses under up to 10 feet of water, and Lyew Ayee is adamant that the selfishness mentality of those who construct houses or businesses without consideration for their neighbours must stop.

Pointing to the 2008 flooding of sections of Ocho Rios, St Ann, Lyew Ayee said it was as a result of debris from a nearby squatter settlement which buried areas of the town under tons of sand.

In the meantime, retired senior superintendent of the now disbanded Public Works Department, Noel Barnett, said while he worked with the department, before any roads or bridges were built, he would make a visit to communities.

"I would go into the communities and find the oldest residents. I would ask them where the gullies run, or where the river used to run before the present course. Taking that approach I have never lost a bridge, nor have flooding in any area PDW built," said Barnett, now 80 years old.

He said many persons are now building without the survey document showing the original waterways on the property.