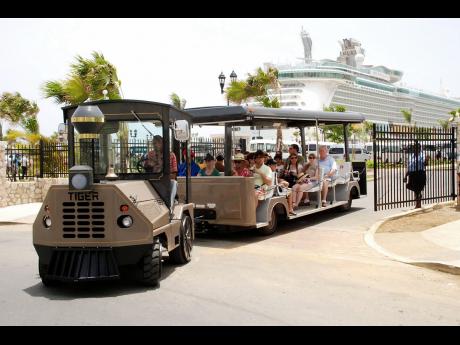 File
The Falmouth Cruise Pier, seen here on its first day of doing business in March 2011, has been a game changer and is responsible for some cruise lines giving Jamaica a second look as a cruise destination.

Tourism officials are downplaying the fallout from the pullout of three major cruise lines from the Falmouth pier in Trelawny.

The Port Authority of Jamaica (PAJ), which is responsible for the management of the island's ports, says several major cruise lines are still committed to Falmouth, despite a decision by the three cruise ships to pull out from the port recently.

The three ships, the Allure of The Seas, Celebrity, and another, which are all subsidiaries of Royal Caribbean, have shunned the port due to concerns over tourist harassment and other issues.

Mayor of Falmouth Colin Gager says the pullout of the three vessels, which together bring in about 10,000 visitors per call to the port, will result in losses of about $5 million monthly.

Tourism Minister Edmund Bartlett has so far remained silent on the pullout of the cruise lines and how this will affect his aim to grow cruise arrivals and earnings.

In his contribution to the Sectoral Debate in Parliament in April, Bartlett boasted of Falmouth being poised to gain substantial economic benefit from a projected increase in spending by cruise passengers, whose numbers he said would be growing significantly by 2021.

However, the PAJ says although the decline in earnings for the destination is noteworthy, it says the summer season generally records an approximately 40 per cent decline in cruise arrivals, compared to the winter season.  It says the 2018 summer season will not see a significant variation, when compared to 2016 and 2017.

It notes that issues of harassment and the vending of illegal products is an issue experienced globally at ports. Nonetheless, it says it has implemented various small and medium-sized projects to address the problems. The PAJ says these include the construction of a new dry goods and food produce market, as well as the installation of directional maps across the town. It says an improvement project has also been conducted along Market Street and the Seaboard Street, while Water Square has been adopted and is being maintained.

The PAJ says it has also collaborated with other agencies, including the police and the municipal corporation to reduce harassment and the plying of illegal goods.

In the meantime, the Port Authority says besides Celebrity Cruises, which is a subsidiary of the Royal Caribbean Cruise Line, all vessels remain committed to Falmouth. It notes that Celebrity was late in its reservation for 2018, resulting in the available berth going to Princess Cruises.

According to the PAJ, Royal Caribbean and its subsidiary, Celebrity Cruises accounted for just over 80 per cent of cruise passenger arrivals, with Royal Caribbean alone accounting for over 75 per cent.

Disney Cruises accounts for just over 10 per cent and other cruise lines, along with some odd calls in the main winter season, accounted for less than 10 per cent.