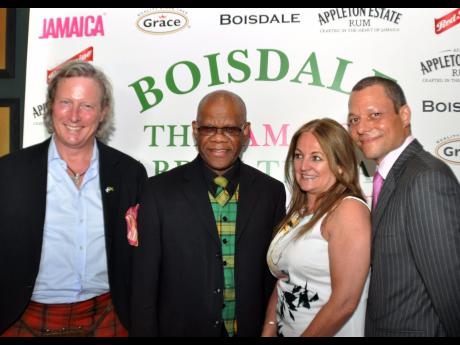 Vivienne Siva photo
High Commissioner, His Excellency Seth George Ramocan (second left), with (from left), owner of the Boisdale Restaurant, Ranald MacDonald; Elizabeth Fox of the Jamaica Tourist Board; and Lawrence Jones, European regional manager for Jamaica Promotions Corporation, at the official opening of the Jamaica Garden Terrace in London on July 3.

The Jamaica Garden Terrace, which will celebrate the historic and cultural links between Jamaica and Scotland, will feature Jamaican food as well as musical performances from well-known Jamaican artistes. The Jamaica-themed terrace will remain in place until August 31.

The high commissioner, in his remarks, noted that Jamaica-Scotland relations date back as far as the 16th century. It is reported, he said, that as a result of that strong influence, many place names and more than 60 per cent of the surnames in Jamaica are of Scottish origin.

"Our national flag was influenced by Scotland, and is the only flag apart from Scotland that includes the St Andrews Cross. It is, therefore, fitting that at this important juncture in our history, we can collaborate with Boisdale in this way," he said.

The high commissioner commended the team that coordinated the initiative, including main sponsors Jamaica Tourist Board, led by Elizabeth Fox, regional director, UK; Janelle Raeburn, co-chair, Jamaica 55 Steering Committee and her team; as well as Ranald MacDonald and the Boisdale team. He also thanked Grace Foods for their support.

Ramocan also mentioned some of the events being held to celebrate Jamaica 55 and he invited guests to join him at the Jamaica 55 church service, as well as at the Jamaica House O2 "as we celebrate our world-renowned athlete Usain Bolt, who will make his final run in professional competition during the IAAF World Championships".

Boisdale's owner, Ranald MacDonald, noted his special bond with Jamaica and that his own mother's surname is Campbell, one of the most popular surnames in Jamaica.

The launch was attended by a wide cross section of the Jamaican diaspora, friends of Jamaica, members of the business community, as well as a number of well-known UK music, sports, media and television personalities.